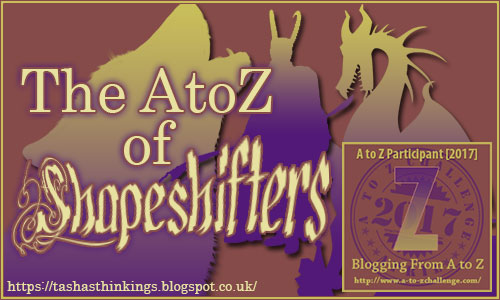 Welcome to Day 26 of the AtoZChallenge and the letter Z. Every day in April (except Sundays) I will be making a post about shapeshifters of all kinds. Check back to see my choices and, from time to time some flash fiction too. 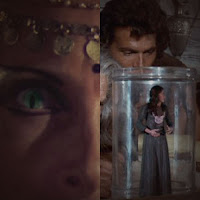 Z is usually a harder letter to fill, but with my theme it was so easy I have two shapechangers for you today. My first is Zenobia, played by Margaret Whiting, from Sinbad and the Eye of the Tiger.

She is a sorceress and the evil stepmother of Prince Kassim of Charak and wishes her own son Rafi to take the thrown instead of Kassim. To do this she transforms Kassim into a baboon. Luckily for him Sinbad is docked so he can ask for permission to marry Kassim's sister, Princess Farah, and so he comes to the rescue.

It is not just Prince Kassim's shape Zenobia can change, but her own as well. She uses a potion which allows her to shift into any form she wishes. At one point she changes into a bird to get to their ship and then makes herself small, but is captured. She is later left with a bird foot after she uses the bird form a second time, but most of her potion is spilled.

The film is one of Ray Harryhausen's and has many of his wonderful special effects. 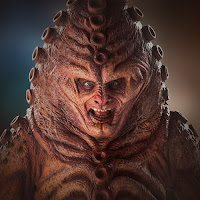 Zygons are aliens from the wonderful Doctor Who. They use technology as part of their shape changing.

A Zygon can use what they call a body-print of an individual to mimic voice and appearance. They create this print by placing the captive in a special receptical, keeping the person alive but unconscious. In this version of the technology, a new print was required every two hours.

Over time this ability became more advanced, leading to not necessarily needing the specemin in the special receptical and then also being able to maintain the shape of a deceased person, with the proviso of not needing anymore information from the individual.

This makes them a formidable enemy for the Doctor and his friends. 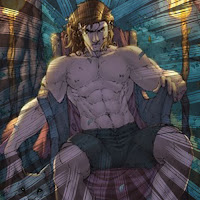 Richard is the Ulfric (leader) of the Thronnos Rokke Clan from St Louis. He was originally the Geri (second in command) to Marcus, but killed him to take the position after having spared him once.

He was engaged to Anita for a while, but broke it off after she slept with Jean-Claude. He is the third member of their triumvirate, which gives them all a great deal of power.

Anita calls him a "boy scout", in that he is polite and kind, but his wolf has a thing for violence and pain, which keeps him from accepting his other nature fully. He is a very powerful werewolf, able to control members of his pack and to protect them.

He is a junior high school teacher and, as such, keeps his status as a werewolf a secret. He did not choose to become one, but was turned by a bad batch of anti-lycanthrope vaccine. He is honey coloured, heading towards red as a wolf.

Richard is basically a bit of a bad ass when it comes to werewolf business and likes to think the best of people in all other situations.


And we're there - thank you so much for sticking with me over the AtoZ. See you for the reflections post.