Sorry it's been so long since my last post, I had the sniffles last week and now I am so behind. 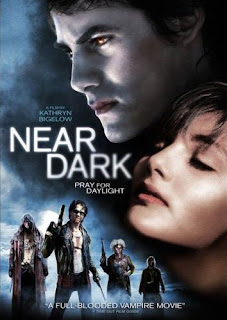 Summary: Caleb (Adrian Pasdar) lives in a small one horse town. One night he meets Mae (Jenny Wright) and they go for a ride in his truck.  Things start to get weird when Mae bites him and runs off. With his truck refusing to start he walks home, but when the sun starts to come up and he starts smoking events really go downhill.

Okay so one of the reasons for this choice today is that we watched this last night and I still love it. This film was released in 1987, the same year as the Lost Boys and yet you couldn't get a more different movie. This is one of the few vampires movies where I forgive the fact the vampires don't have fangs. In fact it's odd that I like it at all because the vampires are just like regular people, except they're very strong and mean, they are really hard to kill and they drink blood.

I usually like my vampire with a huge side of the supernatural and really, in Near Dark the vampires are much more human. They're up against cops and Caleb's family rather than vampire hunters or priests and it's all much more down to earth than I usually like. What makes this movie is the cast and the hurt/comfort it has going on.

I am not going to lie, Near Dark has more plot holes than Swiss cheese and at times the script writer needs to be shot, but that doesn't stop it being a brilliant film. These vampires don't have carriages or mansions or nice clothes, these vampires run around the American countryside stealing cars, killing people and hiding out during the day. They are all about survival and they revel in the death.

When I first saw this movie, it was a vampire movie like I had never seen before. I always imagined vampires like Dracula and even The Lost Boys is of a similar vein: the vampires are otherworldly, sophisticated in their own way, incredibly powerful. In those type of movies it's obvious the vampire has the upper hand. In Near Dark it's not so cut and dried. The vampires still use guns and knives. They're strong, definitely super human, but nothing like as superior as David and his gang.

Where The Lost Boys is fantastic and a little bit campy, Near Dark is dark and gritty.

I mentioned the cast and this film has a great one. Adrian Pasdar is superb as Caleb, confused, unwilling to kill and wrapped up in a whole mess he never asked for. This is the first film I ever saw Pasdar in and I have admired him ever since. Jenny Wright plays Mae as almost gentle, even though she is a cold blooded killer. Then we have Lance Hendeksen as Jesse, who is as brilliant as ever. He's an evil bastard, but a leader who keeps his little family together. Jenette Goldstein is just evil enough as Diamondback and Joshua Miller is alternately menacing and vulnerable as the boy/man Homer.

However, the best character in the film for me has to be Severen played by Bill Paxton. Severen can at one second be charming and the next menacing, not to mention the totally insane moments. He seems to go through life just enjoying everything that comes and not giving a damn about anyone outside his little group. You can tell he likes being a vampire; he likes killing and being at the top of the food chain. He is a grade A psycopath, except that he does actually seem to care about the other vampires. It is a great performance.


BEWARE SPOILERS BEYOND THIS POINT