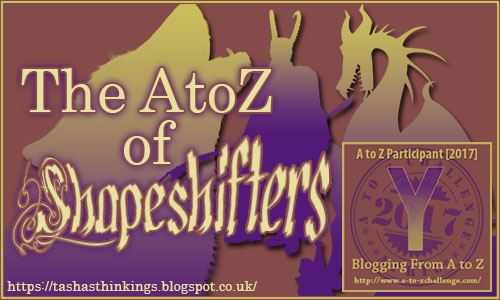 Welcome to Day 25 of the AtoZChallenge and the letter Y. Every day in April (except Sundays) I will be making a post about shapeshifters of all kinds. Check back to see my choices and, from time to time some flash fiction too.

So I have to admit, my shapeshifter today is blowing my own trumpet again. Yesenia is a character from my The Chronicles of Charlie Waterman. She is one of the other six Questors and she is the Questor of the Spider Spirit. This means she had the power to change into the shape of a giant spider.

Charlie takes a while to get used to her in her animal form because he has an unfortunate case of arachnaphobia.

Yesenia is from the planet Hanean, which is a world covered mostly by rain forest and similar habitats. Her people live in harmony with their planet, going so far as to grow their homes and such things as furniture etc. The only place not covered in plan life is the space port.

She is althetic, with a Hispanic apearance. Her nature is to be very direct, which can come off as argumentative. At first she was not very impressed with Charlie, but he has slowly won her over.

I could not find a werewolf for Y, so I have written some flashfic for you instead.

Y is for Yani
part 4 of Curses
by Natasha Duncan-Drake
(each part can be read seperately, but if you read them in order they build on each other - there will be 4 part [Nicky, Paul, Xerxes & Yani])

The note was short and it looked like Paul's handwriting, but Yani knew it wasn't real. Paul never would have left, not when they could both feel the mate bond humming at the back of their minds.

Mate bonds were something the elders of the pack told stories about to the children and what adolescents dreamed about, but the adults scoffed at as being silly legend. That hadn't stopped it from surging through Yani when he had accepted Paul's proposal to become Alpha-elect mate, but it was the reason they hadn't told anyone about it.

Now Paul had disappeared and everyone thought he had run away from his responsibilities, but Yani knew better. He also knew his father had to be behind it. He had seen the remains of the burned mistletoe in the kitchen bin. Attacking Paul outright would have damaged his father's pack bond, given Paul's position, but using magic could circumvent that.

His father had forbidden him from even mentioning Paul's name, but he was not paying any attention to what his father wanted. The ridiculous notion of a proper alpha his father had was utterly stupid and archaic. Which was why Yani had taken his father's car and was speeding down the M1.

He really didn't know what he was doing, but the mate bond was calling to him and he was following it.

"Sorry," he said, even though the Peugeot he cut up to make it to the Nottingham junction at the last second couldn't hear him.

It wasn't exactly like Sat nav, so he was having to be quick.

The feeling that was lancing from the base of his brain all through his body led him to the outskirts of the city and into a car park outside a wide low building. He was so focused on where he was going that it wasn't until he was out of the car he realised he was at a vet's.

"This can't be good," he muttered to himself.

The first thing that hit him as he walked in was the smell. Sickness and disinfectant and other even less pleasant scents assaulted his nose, but luckily he wasn't using it to find Paul. There was no one in reception when he walked in and he followed his instincts with no one to get in his way. The solitary woman and her dog in the waiting area both looked at him, but said nothing.

"Oh my god, Paul," he said as he barged into one of the rooms off the main corridor and saw his mate lying on the examination table with a strange woman standing over him.

Paul immediately sat up and the woman stepped back. Yani was so focused that it was only as he all but ran past her that he realised the woman wasn't a human at all.

"Hi," she said as he stared at her and the clippers and phone she was holding in her hands, "you must be Yani. Paul has just been telling me about you. I'm Nicky."

He looked to Paul then back at the newly introduced Nicky and he was totally confused. There was something about her that felt familiar, but he had no idea why. Then he saw what Nicky had been doing. A patch of fur the size of a postcard was missing from Paul's side and where it had been was a black sigil. Without knowing much about magic, Yani still recognised a curse mark when he saw it.

"Not right," he whispered, because it was the only thing the mate bond would let him think.

His mate was not in pain, but this was wrong, so very wrong and he had to do something about it. He reached out without thinking, placing his hand over the sigil, and just pushed. Heat rushed from his heart across his chest and down his arm like rivulets of fire. Paul yelped, but did not pull away as magic shifted in the room.

When Yani pulled his hand back the sigil was gone, not even a trace of it remained under the black palm print he had left behind. He felt faint and elated at the same time.

"Well I suppose that fixes that," Nicky commented, even as she steadied him.

Paul shuddered from head to toe and let out a low growl as the first sound of popping muscle and shifting bone erupted from his body. Hair retreated into skin, muscles rearranged themselves, his skeleton melted and reformed as Paul returned from wolf to man. Finally, as Yani watched, the leg that was missing boiled back into being, like wax being poured into a mould, until Paul was whole. There were small pink patches on his pale skin where wounds had healed and the leg had reformed, but that would fade in a few hours.

He couldn't help himself, he leapt forward and dragged Paul into his arms.

"I knew you hadn't abandoned me."

Then the guilt hit Yani, because this was his fault.

"My father," he said pulling back.

"Nothing to do with you," Paul assured him. "Are you okay, that was a lot of magic?"

It was only then that his brain caught up with what he had just done.

Paul was the one with the magical talent, that was why Paul was Alpha-elect.

"But magic knows you," Paul told him still looking him over carefully.

He would have complained at the fussing, but he was doing exactly the same thing to Paul.

"Okay ... wow, you're a big boy," Nicky said as she handed Paul what looked like a lab coat, "I think now would be a good time to take this elsewhere, before the rest of my staff get here and start asking awkward questions."

Yani might have taken offense at someone ogling his mate, especially an alpha potential female, but he was only getting friendly vibes from her. He'd met werewolves from other packs before and it had never felt so easy. Something was going on he didn't understand.

"Here are the keys to my Land Rover," Nicky said, handing a bunch to Paul. "It's out back so no one will see you. I just have to go and arrange cover and make up a fictitious emergency."

Paul nodded so Yani went along with it. Only once they had dashed down the hallway to a back door Nicky had pointed at and were safely in the back of her Discovery 3 did he ask his question: "What's going on?"

"They dumped me in the forest," Paul explained, "and the curse and the mate bond were fighting each other, it kept me a little bit sane, but not much. I wasn't thinking straight and I ran in front of a lorry. Someone brought me here and Nicky patched me up, but I bit her while she was doing it. She became a werewolf last night."

"Wow, I think the elders really knew what they were doing when they picked you as Alpha-elect," was all he could think to say.

"Says the man who just channelled magic without ever having being taught," Paul replied with a smile.

He couldn't really argue with that. He had never shown any magical potential before, so he had never been one of the rare few who were taught the craft.

"You'll have to give me lessons," he said.

"It would be my pleasure," Paul said and kissed him ever so gently before pulling back. "But first we have to deal with Nicky and then your father. I'm going to have to call him out."

"Will you kill him?"

Xerxes was an archaic idiot, but he was still his father and it caused a pang as he thought of losing him.

"Not unless I have to," Paul told him, stroking the side of his face. "I won't be able to do anything about what Kurt decides though. He might have named me his successor, but he's still the Alpha."

Yani nodded, he knew that. Werewolves rarely killed each other these days, their society had evolved in the same way human society had, but Xerxes had committed a terrible crime. As head beta it was usually Xerxes job to see to pack law, that he had violated that trust so completely would go against him badly. It would be up to Kurt to decide his fate.

"Kurt is fair," he said, "my father will deserve whatever he gets."

Family was very important to werewolves, but it was not just the trust of the pack Xerxes has broken. Yani could only side with his mate in this.