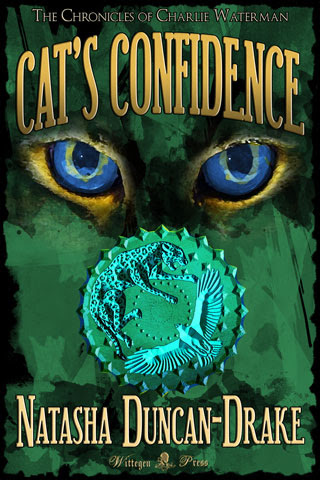 Thank you to everyone who has been so patient, Cat's Confidence is finished and in the pipeline of being published. The official release date is Tuesday October 1st 2013, however, it is available for pre-order.

The very nice people at Smashwords now ship to Apple, B&N and Kobo for pre-orders so we have decided to take advantage of this option. While on pre-order and for one week post the release date, Cat's Condidence will be available for ~10% off at $2.99 (or equiv - regular price $3.29).

Cat's Confidence pre-order options:
Barnes and Noble
Kobo
Apple (coming very soon - it's been submitted, but it sometimes takes them a while).

For those who use other services like Amazon, we're very sorry, there is no pre-order option, but the price will remain at $2.99 for one week after the launch date. So buy early and you will get your ~10% off.

The Seer says that a Questor is always prepared for the Task for which they are chosen and Charlie has been a Questor long enough to know the Seer is always right. Still, it never occurred to him that being ready would mean specific training for a specific Task. Charlie, Kaelyn and Alexander are given six weeks to become a Dragon Warrior team: all they need to do is master magical telepathy, archery, flying and, the trickiest of all, how to put on a dragon-harness in under five minutes!

Once through the portal in the land of Snijela, they must pass as veterans, make friends with other dragons and figure out why they've actually been sent on their Task in the first place. Add in a volatile young queen, two feuding nations either on the verge of peace or all out war, as well as spies, sexism and an alarming acceleration in Charlie's premonitions, and nothing is ever going to be straightforward.
Posted by Tasha Duncan-Drake at 10:26 2 comments:

Y'know, as far as I'm concerned it's not the writing of the novel/novella/short story that's the hard bit. That part is perfectly natural as far as my brain is concerned, no it's what comes next that is difficult. 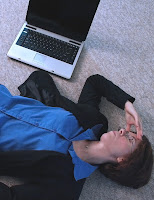 If you go the traditional publishing route, you don't have to worry about this part, but, at the moment, I am attempting to write the book blurb for my new novel (Cat's Confidence - The Chronicles of Charlie Waterman Book #3).

It sounds like it should be easy, doesn't it? A couple of paragraphs about the book; no problem right?

See what I'm actually trying to do is this:


The only reason I can ever do this is because I have a wonderful husband who reads my books and then helps me write a blurb that would make him want to read it.

So I come up with what I think is a good blurb and he reads it over my shoulder while making faces and telling me which bits suck. I honestly couldn't do it without him. He's much better at it than I am and I think that might be because he has a terrible memory for fiction. Hence, when he reads he usually only remembers the important bits, where as I have everything running around in my head and often can't focus on just the exciting parts.

I went on a self-pub course a couple of years ago and even the professionals at HarperCollins admitted it's a deep and mysterious art. They have people employed specifically for doing just that, but we self-pubs have to manage it ourselves. Although I suppose there must be people out there who will do it for you for a fee.

A blurb can make or break a book too. Even if you have the most wonderful cover and your books is edited beautifully, if the blurb is bad it can frighten away your readers. I've been on a horror kick lately and have been downloading a lot of free and low price horror books to fill my craving. Some I saw but did not obtain had the loveliest covers, but the blurb either didn't tell me enough or didn't make sense or didn't grab me or had mistakes in it.

Here is a good breakdown of how to write a good book blurb.

Here's an even more detailed one.

It's almost as hard as writing a synopsis when submitting a manuscript. Of course it would be too easy if they were the same skill, but they actually require a different mindset because you're not trying to hide the ending in a submission.

Thank you for listening to me whine, I'd love to chat if you have your own blurb horror stories, whether from reading them or trying to write them.
Posted by Tasha Duncan-Drake at 12:20 4 comments:

So my new novel is almost ready. I'm formatting it as we speak and then it just needs some final checking and it's good to go. It's called Cat's Confidence and is the third book in The Chronicles of Charlie Waterman. It has magic and dragons and lots of other good things :).

What I like about writing the Charlie series is because each adventure is partly set on a new world I can go for a new slant in the genre. The first one is contemporary fantasy, the second is mafia and paranormal and this one has a high fantasy bent to it because of all the dragons.

It's actually taken a lot longer to finish than I thought it would, but I'm really pleased with the end result and giving my readers the best I can is always my aim. So sorry to those I have been keeping waiting, but it's ready now. Watch this space for the release date.

I've also decided what I am going to write for Nanowrimo this year. Usually I do the next in the Charlie books, but since I have only just finished the last one I'm breaking the chain.

I'm seriously considering looking for an agent again, at least for some of my books, and I have one who I would really, really like to catch. I think the novel I want to write for Nano could grab her interest and I've been meaning to finish it for a while. So far I have 10K wds and so with an extra little push I could finish the first draft during Nano and edit it up afterwards.

It's sci-fi/fantasy adventure, futuristic, but with a touch of myth along the lines of something like Indiana Jones. I suppose it could be looked at as a little like reverse gender Indie in space. My lead is called Eli, she's feisty, fearless, asexual and has a rather problematic deep, dark secret. She is backed up by Lance, who is her eccentric AI and makes it his duty to fill the gap Eli leaves in the sexual market with just about anyone he can get to enter VR with him as well as making sure Eli doesn't do anything too insane. They retrieve things that have been lost, usually in very dangerous places.

I'm at the stage where I know what happens in it, but not quite why yet, so I shall have fun diving in. I don't plan for Nano, I just write, so I think I'm actually good to go way before I need to be. Who knows I might be 30K words in by the time Nano starts, then I'll have to write something else too :).
Posted by Tasha Duncan-Drake at 17:43 2 comments: