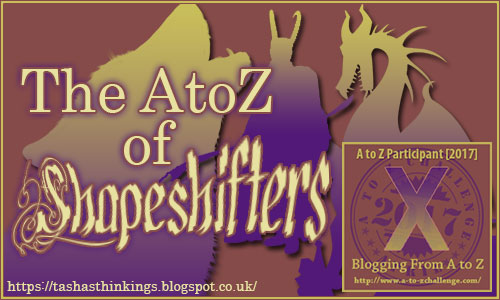 Welcome to Day 24 of the AtoZChallenge and the letter X. Every day in April (except Sundays) I will be making a post about shapeshifters of all kinds. Check back to see my choices and, from time to time some flash fiction too. 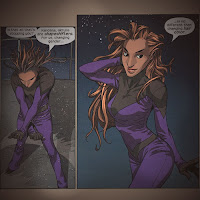 Xavin is from the Marvel comic Runaways. They are a Super-Skrull in training and hence are a shapeshifter. They are also genderfluid and are seen as both male and female at different times.

Xavin is the child of the Skrull Prince De'zean and found it very hard to fit in with the Runaways when they first came to Earth because they were unfamiliar with Earth norms and the gender switching confused people. They are somewhat obtuse and have a warlike personality thanks to their Skrull nature. However, they often overcome this to help their team.

Xavin, when talking about their race, once state: "for us, just changing our gender is no different than changing our hair color". So it is believed that all Skrulls are genderfluid.

I could not find a werewolf for X, so I have written some flashfic for you instead.

X is for Xerxes
part 3 of Curses
by Natasha Duncan-Drake
(each part can be read seperately, but if you read them in order they build on each other - there will be 4 part [Nicky, Paul, Xerxes & Yani])

Xerces followed the alpha-elect from the farce of a gathering. He has stood there and smiled, pretending like he was supposed to all through it. Kurt knew he did not approve of the alpha's choice of successor, but, being a beta enforcer, it was not this place to disagree with the alpha in public. Before he had been willing to bide his time and convince Kurt slowly that Paul Ulvis was the wrong person, but now this involved his child.

Yani had stood there all through the announcements next to Ulvis, hand in hand, smiling brightly. Just the thought of it made Xerxes blood boil. How dare that pitiful excuse for an alpha-elect court his child as a mate.

When he was young, an alpha was always the strongest, the one who fought off all his rivals to prove himself worthy. Kurt said that that was no method to choose a successor, that their society had evolved since those harder days, but Xerxes thought it was time for a resurgence of the old ways. Ulvis was a powerful magic user Kurt insisted, he would make a strong and wise alpha when the time came. Xerxes was sure the man should have been bound as a child to be used as the tool he was. A sorcerer was useful to an alpha, they should not be one.

The small bundle in his hand from the witch felt hot, even through the leather glove he had put on before he had touched it. He had had to look far from the pack for a witch willing to cast the spell he had asked for. All the locals would have gone straight to Kurt. Casting such magic in a territory with a powerful wolf pack would have been asking for trouble.

The witch he had found had been willing to do anything for money. The man had clearly been addicted to something. Xerxes had no qualms about using such wastes of oxygen. When this was all settled and Ulvis was dead in a ditch somewhere, he would go back and put the human out of his misery, just to be sure.

"Ulvis," he called, once he was sure they were far enough away from the party still going on.

The man turned, clearly unaware he had been being followed. Just another sign he was not worthy to be alpha-elect.

Xerxes walked forward, hand by his side.

"Actually, this is perfect. I know you probably think I did this to spite you, but I promise, that's not it and there's something I need to tell you..."

Xerxes did not want to know what the pathetic excuse for a wolf wanted to say and he lashed out. With one hand he grabbed Ulvis by the throat, pushing him back into the wall behind him, and with the other ripped open Ulvis' shirt and jammed the curse bundle into the alpha-elect's side. He felt the vial in the bundle break on impact and he pushed hard, speaking the one word to activate the spell as the liquid hit his victim's skin.

Then he released his hold and stepped back, just watching.

Ulvis' features were twisted in confusion and pain. He tried to speak, but all that came out was a tiny gurgle. Every reaction just cemented Xerxes opinion of him. Staring down at the bare skin, Xerxes watched the horror grow on Ulvis' face as the curse mark began to appear.

The look that came Xerxes' way clearly begged why.

"Your weakling strain will no longer infect this pack," he said as the transformation from man to wolf began in his victim, "and you will no longer claim my son."

Ranar, his most trusted lieutenant was waiting outside in the van. Once Ulvis was fully transformed the alpha-elect would be helpless for hours, barely able to move as the forced transformation weakened him. Xerxes had planned very carefully where Ranar would release the cursed wolf, just as Ulvis' strength started to return, but while their alpha-elect was still confused and vulnerable.

Ulvis would die in traffic, an unregistered pet, apparently set free in Nottingham Forest, only to wind up on the motorway in a tragic accident.

The letter he had forged would convince the pack that Ulvis just couldn't take the pressure of being alpha-elect and had run away. They would never know where he had gone or what had happened to him and it would be an end to the matter.

Next time Xerxes was going to make sure Kurt made a better decision.