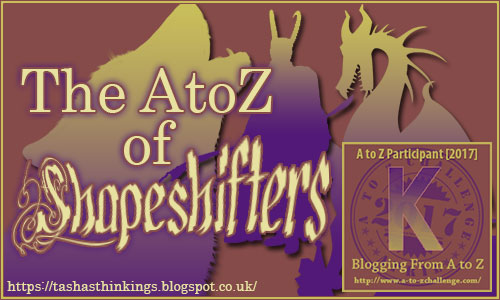 Welcome to Day 11 of the AtoZChallenge and the letter K. Every day in April (except Sundays) I will be making a post about shapeshifters of all kinds. Check back to see my choices and, from time to time some flash fiction too. 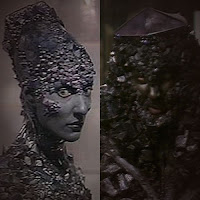 Back to my childhood we go, although I have to admit I don't actually remember ever seen this Doctor Who episode at the time since I was only 4. It is called The Hand of Fear.

The Kastrians are a silicon based lifeform and the one we meet is called Eldrad. Although not technically shapeshifters of the can-change-form-at-will kind, Eldrad regenerates into a female form from just a hand and then, later regenerates again back into his male form. Destruction of the previous phsical form is required first and regeneration takes an emormous amount of energy.

This makes them very hard to kill. In fact Kastrian execution is called Obliteration and involved blowing up a spacecraft in the vastness of empty space. Eldrad only survived because his execution had to be done early before the spacecraft had reached position and the hand landed on Earth.

Kastrians also appear to have the ability to control human minds.

Eldrad is definitely not someone to mess with if at all possible. 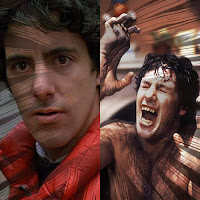 So I've talked about the sequel for A, so let's talk about the original for K: An American Werewolf in London. David Kessler (David Naughton) and Jack Goodman are American backpackers trapsing across the North Yorkshire moors when they come across The Slaughtered Lamb pub. Here they meet very weird locals who warn them not to leave the path.

Unfortuneately they don't heed the warnings and Jack is killed which David is infected by the bite of a werewolf.

David wakes up three weeks later in hospital in London with no memory of the attack. Things are quickly explained, however, when Jack appears to him as an animated corpse and tells him he's a werewolf. He also urges him to kill himself so he doesn't kill anyone else, which is not so good.

David does not believe what he is seeing and hearing until he turns into a werewolf and does exactly what Jack told him he would.

There is no doubt aAWiL is a classic black comedy horror. It's dark and bloody, but very funny at times too. Well worth seeing.


Thank you all for any comments, I hope you liked today's choices.
See you soon. Have fun with the other AtoZ sites.