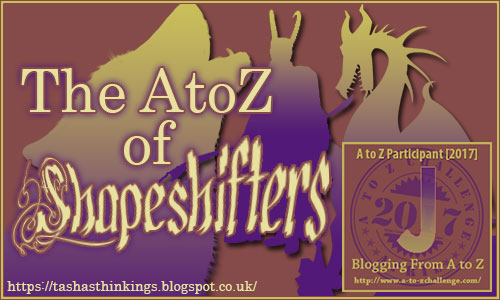 Welcome to Day 10 of the AtoZChallenge and the letter J. Every day in April (except Sundays) I will be making a post about shapeshifters of all kinds. Check back to see my choices and, from time to time some flash fiction too. 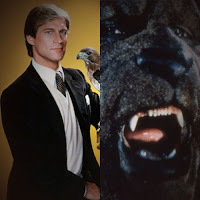 Dr Jonathan Chase is a character from the action adventure series Manimal. He was played by Simon MacCorkingdale and he was terribly dashing.

Now this series was made in 1983 and, at the time, the special effects were thrilling. These days they look really rather bad :).

You see Jonathan's secret is that he can turn into any animal. Studying with shaman in Africa and holy men in Tibet he learned the art and he now uses it to fight crime. Only two people know his secret, his best friend Ty and Detective Brooke Mackenzie. To everyone else he is a rich animal expert who turns up in the oddest places.

For any of us who watched this when it first aired it is iconic, but trust me, rewatching it, be prepared to cringe. They are, however, planning a new movie, which, let us hope, will be up to scratch.

Jamil is an enforcer in the werewolf pack of St Louis, the Thronnos Rokke Clan. His position is called a Skoll. He is the number one enforcer and hence acts as the pack leader's bodyguard.

He was thrown out of his previous pack for being a trouble maker, but serverd under the previous Ulfric of the Thronnos Rokke Clan as Skoll as well. In werewolf tradition, when a new Ulfric takes over he should have killed Jamil as well, but did not, which makes Jamil very loyal to his new Ulfric indeed.

Jamil is just under 6ft tall, he is slim, moves like a dancer, and very, very strong. His skin is a rich brown and his hair is long and woven into corncrows. He is one of the few members of the pack who can keep the Ulfric's power out of his mind.

Thank you for stopping by.
Happy AtoZing!