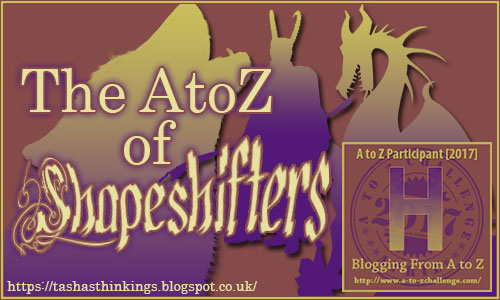 Welcome to Day 8 of the AtoZChallenge and the letter H. Every day in April (except Sundays) I will be making a post about shapeshifters of all kinds. Check back to see my choices and, from time to time some flash fiction too. 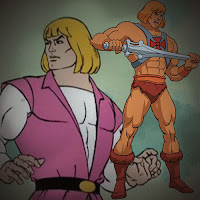 No, this isn't from the movie Masters of the Universe again because He-Man is never Adam in that. Today I am talking about the original cartoon.

Prince Adam of Eternia is given the Sword of Power by the Sorceress, which give him to power of Greyskull and transforms him into He-Man, the most powerful man in the universe. It also tranforms his cowardy, green pet tiger, Cringer into Battle Cat.

Frankly I never could understand how no one knew Adam and He-Man were the same person - I mean Adam even has the muscles. He doesn't even have glasses to get in the way like Clark Kent! He really only changes clothes and gets a tan ;).

Clearly people in Erternia are face blind and go by what people wear, since no character ever changed costume, ever ;).

We never watched He-man regularly, but I remember enjoying the odd episode. My husband and I watched a few recently on Amazon Prime too :). It brings back fond memories. 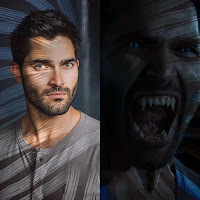 My werewolf today is the lovely Derek Hale, from MTV's Teen Wolf as played by the were easy on the eyes Tyler Hoechlin.

Derek is my favourite character in Teen Wolf, right after Stiles and, yes, my OTP is Sterek! Derek is a somewhat grumpy beta then alpha then beta werewolf, born into a werewolf family and has a truly tragic past. Almost his entire extended family, were burned alive by rogue werewolf hunters when he was a teenager, and they gained access to the house because one of them seduced his underage self.

His sister Laura became the alpha and they went to New York, but when Teen Wolf opens, Derek has returned to Beacon Hills looking for his sister, who has returned there looking for something and disappered. It is quickly established she is dead.

When Derek becomes alpha he makes some questionable choices, but does, in the end, grow into his role, sacrificing his alpha powers in the end to save someone he loves. Derek is gruff and grumpy, but kind of sweet too, and there is a sense of humour lurking under the dark exterior.

Teen Wolf has some major plot problems, but many of the characters are great and played by brilliant actors. Up to the end of season 4 is worth watching.


Thanks for reading, I hope you approve of my choices today.
See you tomorrow :)