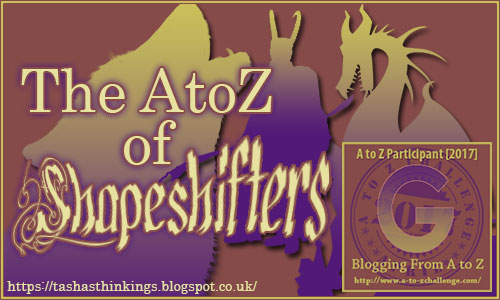 Welcome to Day 7 of the AtoZChallenge and the letter G. Every day in April (except Sundays) I will be making a post about shapeshifters of all kinds. Check back to see my choices and, from time to time some flash fiction too. 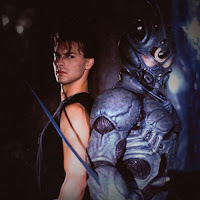 So you could argue that the Guyver isn't really a shapeshifter, since it's really alien armour covering a human, but I would disagree. The armour is almost an entity and it definitely changes shape, disappearing into Sean when not in use.

Sean Barker accidentally bonded with the armour in Los Angeles, where he used it to bring down the Chronos Corporation and their band of Zoanoid mutants. In Guyver Dark Hero (the movie the image left is from) it is a year later and Sean (David Hayter) has been using the armour to fight crime. Unfortunately he feels the violent urges trying to take over and is still looking for explanations.

The Guyver is a very powerful weapon and when Sean becomes the Guyver he is extrememly dangerous. In Dark Hero he goes to an archeological dig where he hopes to find answers.

There is no CGI in these movies, it's all martial arts and rubber suits. They are a lot of fun and Mark Hamill is in the first one, so what's not to like? 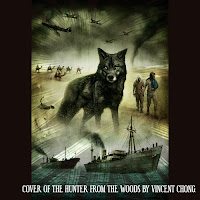 Today's werewolf comes from the pages of one of my favourite books: The Wolf's Hour by Robert R. MacCammon. What I was delighted to discover when researching images for this post is that there is also a collection of novellas for the series as well called The Hunter From the Woods.

Michael Gallatin is the lead in the novel, which is set in World War II and flashes back to the Russian of Gallatin's childhood.

Gallatin is a spy for the allies having become a naturalised British citizen and is retired due to his outstanding service. However he is reactivated because the Allies have word that the Nazis are up to something that might affect Operation Overlord.

Gallatin was infected by a werewolf in the forrests near his home after having witnessed his parents and sister brutally murdered by forces in Russia. For a while he lives with them in the forest, but eventually returns to civilisation and into service as a spy.

He transforms fully into a wolf at will, but when in wolf form ages as a wolf. He is hardy, but not invulnerable.

I have read this book at least five times now and would have read it more often if it wasn't so long :). It's very exciting and the flashback is dealt with in a way that does not interupt the main story. I was so happy when I realised there were more stories.


I very much hope the posts are keeping everyone entertained, thank you so much for dropping by.
See you on Monday! Happy AtoZ.