W is for Werewolf - Blogging from A to Z April Challenge

Werewolves are a great topic in literature and film. I'm not as fond of them as vampires, but I will admit they have their own section in my DVD collection :).

Lycanthropy, aka the ability to turn into a wolf, or a wolf-like creature had been a part of folklore for a very long time. According to wikipedia the Roman author Petronius and the 13th century English canon lawyer are both sources for the early belief in this affliction.

I am more interested in the use of lycanthropy in fiction. When it is brought to the screen or the page it is very often a curse brought on by the full moon. The victim becomes a slathering beast ready to kill any and all, friend or foe as the moon has her way. It is the ultimate loss of control, the reduction of a thinking, feeling human being to the form of a blood-crazed beast. Many stories use them as a metaphor for sexuality; the beast that especially protestant Christians were so afraid of.

For this post, however, I don't intend to delve too deeply. I'm going to share a few of my favourite werewolves with you.

Now in modern fandom when you talk about werewolves then you really have to talk about Teen Wolf. I am not part of the fandom, in fact I have only seen ten minutes of the show, total, but I have read some of the fic. I have to admit that when someone says Teen Wolf I still think this: 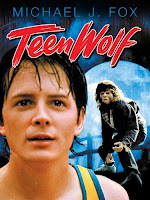 But I would be the first to admit that this is way hotter :). 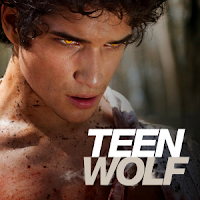 Now if you want darkness and humour, there is one of the greats of werewolf cinema: An American Werewolf in London. I still vividly remember the first time I saw this film. The horror, the pain, the very dark humour. It never left me, especially the iconic scene where David first turns into the werewolf.

It is possibly the most harrowing werewolf transformation I have ever seen and the fact there is the jaunty music in the background just makes it so much worse somehow.

I know a lot of people don't like the sequel, An American Werewolf in Paris, and I do have to admit it is an entirely different type of film. However, I do rather enjoy it. It's much lighter than the original and no where near as deep, but it's a fun horror movie.

One of the first werewolf books I remember reading was The Howling, but I've never seen the film based on the book. I have seen The Howling VI : The Freaks, however, and it has a vampire in it, so you know I'm going to have enjoyed it. Since it also stars Bruce Payne, who always plays an excellent bad guy, this is one of the ones I have in my DVD collection even though it's somewhat cheesy. 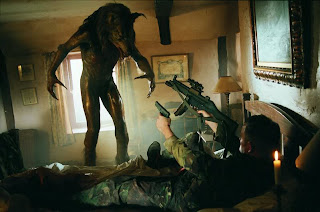 There are many others I could mention, but then the post would be far too long, so I will round off with my favourite ever werewolf film: Dog Soldiers. This is a film about a squad of UK soldiers on an exercise in Scotland who end up barricaded inside a remote farmhouse, besieged by werewolves.

The film is a UK production, so not as big a budget as a big US film, but it is very slickly done. It was written and directed by Neil Marshall and stars Kevin McKidd, Sean Pertwee and Liam Cunningham. It is brilliant.

It's funny, horrifying in all the right ways, has great effects and was written by a fan boy, so there are so many in jokes it's even more hilarious if you're a geek. The plot has twists and turns and never lets up. This is a full on, old fashioned horror movie, so don't expect most of the cast to survive, but everyone who kicks the bucket does so in the most brilliant of ways. It also has the funniest commentary I have ever listened to on the DVD.

I shall leave you with my favourite quote. Spoon is one of the soldiers and Cooper and Wells, two other members of his squad, have just run into a room looking for him, a room that is now empty and covered in blood.


Cooper: Where's Spoon?
Sergeant Harry Wells: There is no Spoon.

Go on, tell me which film that's referencing :).

We have a couple of books out with werewolves/shape shifters in them if you are interested (mostly paranormal rather than horror):