Summary: Joey bumps into a strange woman on the street one night as she is being chased by two goons. He offers her a ride, which turns out to be the start of something that will change his life. At first he thinks Mary is a defector from the Soviet Union, but Mary is from a lot further away than that; she's from a different planet.

This is yet another made for TV movie from the 80s which isn't available on DVD, but I wish it was, because I love it to bits. It's one of those films that pushes all my buttons. 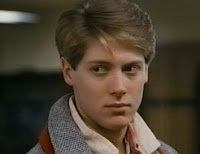 Given how well James Spader is known I would have thought his back catalogue would be worth investing in, but, as yet, no one has brought this to DVD. This is one of those movies for which I wrote fanfic before I knew about the internet or anyone else doing the same thing. I have a little reporters notebook full of the sequel to this movie :).

Having just rewatched the film and dug out the fanfic I now realise I spent the whole thing calling Ralph, Huey, which is actually the name of one of Joey's pet fish, but never mind :).

Now, back to the film. It's not a complicated plot. Mary's an alien with alien powers (telepathy and telekinesis) and she's on the run from nasty aliens who have taken over her planet. Joey, being the upstanding guy he is, helps her and ends up on the wrong side of the bad aliens and the Feds. There is romance, there is mystical bonding and I just love it all.

I am a big James Spader fan and have been for many, many years. He has played a lot of bad guys in his time, but I first saw him as a good guy and I've always thought he was very easy on the eyes. Turns out his intense stare is because he has incredibly bad eye sight and can't wear contacts.

He is great as Joey. Basically he's an all American guy willing to help the girl on the run in the name of freedom, or possibly because he fancies her, or both. He's not complicated and drops his whole back story in one conversation, but the way Spader plays him just makes him so likeable. He's the hero through and through and the way he reacts to Mary's revelations is perfect.

Then we have Belinda Bauer as Mary. She's vulnerable, but strong and does rather bewildered alien very well. There is subtlety to the way she plays the character and depth that make Mary a very sympathetic role that draws the viewer into the film.

I'm not going to lie, some of the dialogue in the film is ... how shall I put this ... terrible, and some of the delivery from the side characters is worse, but I don't care. There is a charm to this movie that no amount of bad acting from the bit parts is going to take away. As I mentioned this film hits my buttons. I suspect if you don't have the same buttons you might not like it as much as I do :). 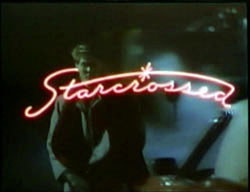 This is a film that gives you exactly what you expect. The plot has only one layer. The good guys have to eventually win. Joey and Mary are bound to fall in love. However it delivers all of what it has to the best of its ability and I am never not going to be able to sit down and watch it over and over again. I spent years trying to find this on tape after I first saw it on TV; that's how much I enjoyed it.

If you are a fan of James Spader or Belinda Bauer then I am pretty sure you'll enjoy this if you ever get the chance to see it.
Posted by Tasha Duncan-Drake at 14:03