X is for Xenomorph - Blogging from A to Z April Challenge 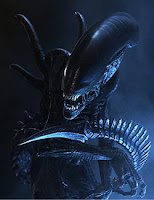 Hmm, perhaps that wasn't the best way of putting it :).

For those who don't know, xenomorph is the name used by fans of the franchise for the aliens in Alien and the following movies. It's not actually their official designation, but it'll do. Now here is a triumph of cinematic brilliance. These things are creepy and scary even when you know they're coming.

It really doesn't matter that I've seen most of the films multiple times, these beasties can still scare the hell out of me.

It actually took me a long time to see any of the Alien movies. I wasn't old enough when the original came out, or the second one for that matter because it's an 18 and in 1986 I was too young to see it. Hence I have seen all but Alien Resurrection on VHS, DVD or Blu-ray.

I think I saw Aliens first, but don't quote me on that. I've always had a bit of a thing for Michael Biehn and I do love him as Hicks in this film.

However, there are two stars of the Alien movies, Ripley and the xenomorphs, especially the queen. Now Ripley is superb and I thought what Sigrourney Weaver did with her in Alien Resurrection was simply genius, but we're not here to talk about humans.

The xenomorphs were designed for the original movie by H.R.Giger, deriving from his artwork entitled Necronom IV (see right) and then refined in several ways for the film.

The fact that in the original film the xenomorph is a man in a suit is quite remarkable, given quite how creepy the alien is. So many special effects with men in suits are cheesy and terrible, but in this, Bolaji Badejo, who was discovered in a local pub, did an amazing job.

There is something inherently horrifying about a creature that preys on human beings, especially in the way they trap, implant and leave them to a horrible death. For example you have another Giger like alien in Species, but I don't find her anywhere near as frightening. Yes, she is badass, yes she kills easily, but she is looking to impregnate herself. The fact that the xenomorphs are looking to catch and impregnate humans is far more terrifying.

The way the victims beg to be killed says it all really.

What makes them even scarier is that they are eusocial, like ants and bees, which means they don't care about themselves, only the hive and the queen. This makes them an unstoppable force, because the only way to stop them is to kill them all. The Predator is just as alien as a xenomorph, but I've never found them particularly scary because their motives are more understandable. They're hunters; it's a very human motivation, but xenomorphs have no human motivation. Their entire existence is for the hive and the queen.

To tell you the truth, I find the face huggers; the second stage of the alien life cycle, much more frightening than the xenomorphs, but there is something much more majestic about the xenomorph. The fact they look humanoid in shape just makes what they do to humans so much worse. They are the perfect warrior and you have to respect anything that can kill in so many ways. The fact they can still kill you with their acid blood if you splatter them and are not far enough away ups the danger level considerably.

Aliens are a cinematic monster classic, which I suspect will be remembered for a very long time. The fact they were made slimy by K-Y Jelly is a fact that will never cease to be amusing, but I digress :). Xenomorphs are the badest alien species out there and their creators deserve all the respect they get.

Thanks to Wikipedia for the Geiger piccie and some of the facts.