V is for Vampire - Blogging from A to Z April Challenge 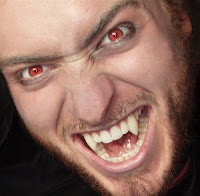 Greetings and welcome to my blog for the letter V. I have no doubt that from the picture to the left you have figured out that my topic for today is vampires.

I love vampire fiction in most of its forms and hence today I decided to write you all a short story. I very much hope you enjoy it. It is a male/male relationship, but has no adult content.

Waking up was, well, unexpected if Karl was honest with himself. His last thought came back to him and it had been along the lines of 'well it's been a good life'. The next thing that occurred to him was that it was dark.

He opened his eyes ... it was still dark.

He was lying on something soft, but not very thick and when he moved his right arm he hit a wall. This encouraged him to try with his left and he hit another one. Lifting his leg and whacking his knee on something not very far above it, led him to conclude he was in a not very big box of some kind.

The fact that his brain was not quite online meant that it took him a few seconds to put together his first thought and the current evidence.

"I'm in a coffin," he said and, as if to prove his point, his voice bounced straight back at him from a few inches above his nose with the dead sound of being in a very confined space that did not resonate.

In all truth Karl knew he should have panicked about then, but he lay there feeling strangely calm. It was almost as if part of him had been expecting the whole situation. Just lying there, he searched through his memory to see if he could figure out why.

It had been snowing and he had been driving home. The motorway was shut thanks to a jack-knifed lorry, so he had taken the back roads; lucky for him he drove a 4x4. He had seen a guy shivering on the side of the road with a thumb out and for once his good citizen conscience had kicked in and he had stopped.

Then he remembered driving on, a sharp pain and then the whole near death thoughts before nothing.

He was sure he was missing something.

Had he been stabbed?

Feeling around was difficult, but he couldn't find anything.

It took him a while, but his brain was slowly getting back up to speed. Finally he tracked down part of the elusive memory; the pain had been in his neck.

Had he really just sat there with that much pain in his neck? He didn't think he could have, but his mind seemed to be shying away from something.

It had to be to do with his passenger, but what? Lying there, staring into the darkness Karl pushed at the memory. It did not want to come back to him, but he pushed hard and after several minutes it was as if something snapped. Then it hit him like a flash: snarling lips, glistening fang like teeth and red eyes that glowed like hot coals.

"Oh," he said and blinked in the darkness.

Suddenly waking up in a coffin made a lot of sense.

Karl was not a horror film aficionado, but he couldn't help thinking it would have been much easier if he had woken up before he was buried. Actually he wasn't even sure why he had been buried; his family were the cremate them and scatter them types. Not that he was complaining, because he would have had a very short time as a vampire if that had been the case.

Of course he was assuming a lot, so he did a quick mental check. He did feel different, for a start he should really have been screaming his lungs out, but he didn't have that urge at all. The fact that he had no idea what he was doing didn't stop him just trying some mental exercises. He tried thinking of blood, of violence, of bats, but nothing seemed to make any difference. In the end he did what, on reflection, he realised he should have done in the first place, he thought about being a vampire.

Almost like turning on a switch, his environment entirely changed. It was no longer dark, or rather it was dark, but everything seemed to be edged in red detail, so it didn't matter that it was dark. He could also hear someone humming under their breath. This person was above him. The sensation of his teeth actually moving in his jaw was unpleasant, but by then he was far more interested in the fact that he felt suddenly famished. The owner of the voice became instantly much more important to him, although not as someone that might facilitate rescue, but rather as a possible food source.

This thought did strike him as odd, but it didn't stop him trying to sit up. It really only occurred to him after he was beginning to stand that he shouldn't have been able to do either. It was then he realised he wasn't actually standing at all, he was in fact an incorporeal mist that was working upwards through the dirt above his coffin and when he hit fresh air he had to concentrate very hard to stay in one place.

"Oh, it's you," he said as he coalesced back into a solid form, standing in what appeared to be the graveyard of his local church.

There, sitting on a nearby gravestone, was the man who had attacked him.

"Of course it's me," the other vampire said in a very chirpy manner, "I've been waiting for hours."

"I'm hungry," Karl complained even though he probably should have been angry or something.

His companion had the audacity to grin at him.

"Come here, Precious," his creator said and stood up, reaching out and pulling him forward by the lapel of his jacket. "Have a nibble and you'll feel much better."

"I am nobody's precious," Karl tried to complain, but the other vampire exposed a long line of pale neck and his whole attention was grabbed.

His mouth began to water and he leant in without even considering not doing it. The flesh under his mouth gave no resistance to his fangs and his mouth filled with sweet, fragrant blood.

Karl had never had an experience like it; he felt alive as if for the first time in his whole existence. The taste was better than any food he had ever eaten and it intoxicated him far more than the weed he'd tried at university. He wanted more, he wanted it all ... and then his legs gave out.

He knelt on the ground blinking, trying to work out what had happened and his companion had the gall to laugh at him.

"Oh Precious, I'm going to enjoy having you around."

"I made you so you can't harm me," his maker said, "I can't harm you either, for that matter. Call it an evolutionary trick to ensure the propagation of the species. Don't let the other buggers catch you unawares though; they'll eat your newborn arse. It's you and me, Babe, against the night."

"I was starving, you stopped and I felt the spark in you when you shuffled off the mortal coil, now we'll be fabulous together."

"I'm a fifty three year old banker with a paunch and a receding hairline, there is nothing fabulous about me," Karl pointed out.

"Not any more, Precious," the other vampire said; "you left most of that down there. Now you're a twenty-something stud, admittedly in bad clothes, but we can fix that."

Then Karl found himself being kissed and it was hot and messy and he forgot about most things for a while. Only when his new friend drew back did he remember a significant fact.

"I'm straight," he said, although his body was reacting in rather specific ways for that to actually be true.

His statement got him laughed at again.

"We all pick up things from our parents, Precious," his maker said and pulled him to his feet. "Come on, we need to get to London where I have a place to stay and lots of lovely twinks willing to let us bite them."

Karl tried to be annoyed about that, but decided he couldn't be bothered.

"It better be a nice area," he said, feeling a little petulant; "I'm not living in a slum."

His companion laughed as if this was the funniest thing he'd ever heard and Karl followed the vampire towards the lych gate. It was only as they were stealing one of the very nice Mercedes from a neighbour Karl had always disliked from where it was parked outside the local pub that he realised he didn't even know his new friend's name. Being undead was far more exciting than being alive.


If you are interested in reading more of my fiction, these are the books I have out that have vampire content:
The Soul Reader Series (two of this series are free from some retailers).