U is for Unicorn - Blogging from A to Z April Challenge 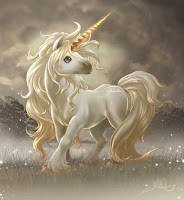 I have loved unicorns since I was a little girl and I make no excuses for it at all. They are noble and pure creatures and I don't think I've ever seen them in anything where I didn't love them. Admittedly the bit in Blade Runner is pretty odd, but. well, it's still a great film.

The fact that they are supposedly drawn to virgins makes them an utterly fabulous plot device. 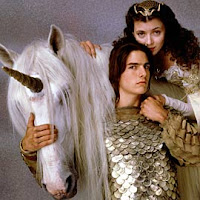 In the film Legend, they are used as a metaphor for Lili's journey from girl to womanhood as well as the very real part of the plot to encourage along the whole story. I'm rather fond of Legend. Yes it's a little corny in places and slapping half the characters seems like a really good idea at times, but it's still a brilliant film. If nothing else you have to give it points for Tom Curry as the Lord of Darkness. 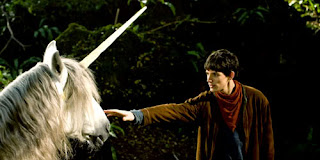 Another great use of a unicorn was in Merlin. I still think the first season of Merlin was the best and I loved the way they used the unicorn. We all know Arthur is supposed to become a good and pure king, but in this episode he had to prove it.

The fact that the unicorn was attracted to Merlin also gave the fanfic writers hours of fun :).

Of course unicorns aren't the only mythical creatures I adore. I've always loved dragons as well. In a lot of films and books of my childhood  dragons were the bad guys, but I could never help liking them. Dragons are just a regal as unicorns, only they tend to be a bit bloodier. Unicorns win with magic and purity of heart, dragons win with magic and really sharp teeth.

In most fiction unicorns tend to be shy, retiring creatures who give their trust only grudgingly. They are also often the innocent victims as magicians and sorcerers attempt to steal their horn. I do enjoy it when the unicorn turns out to be a little more kick-ass though, either because of their innate magic, or because of what the protagonists help them to do.

In the fantasy genre you often find the unicorn used as a symbol of peace, similar to the dove in Christian theology, and peace is a worthy goal. I won't say the unicorn is my favourite mythical creature, but it is definitely up near the top.

Do you like unicorns? What is your favourite mythical creature?