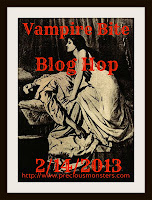 Hello and welcome. This is my post for the Vampire Bite Blog Hop. BTW - there's free stuff at the bottom of this entry :). Thanks to Jolie du Pre of Precious Monsters for running this blog hop.

I am Tasha and I'm a full time author and something of a vampire fan, just ask my friends :), so when I saw this Blog Hop I just had to sign up. There are quite a few posts about vampires on this blog already, so if you'd like to see them just check out the Vampire tag by clicking here. I'd love to chat if you fancy leaving a comment.

Vampires exist in fiction, myth and folklore in so many different forms that it's hard to keep up. Most westerners when they hear the word vampire think of Dracula thanks to good old Bram Stoker, or, more recently, Edward Cullen. These are your modern vampires, very good for coming of age and sexually charged stories, but there are many more types of vampire, mostly not so pretty. 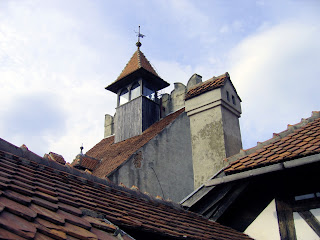 I love looking up vampire lore, because it makes creating characters so much fun. As a writer I can take a bit from here, a bit from there and basically do just about anything I want. So let me share with you some of the interesting vampires from around the world (they have some great names as well). By the way this is in no way an exhaustive list, just some of my favourites. 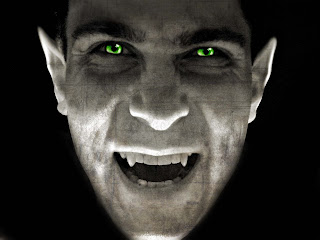 Let's start close to home in Europe. There is the fearsome Nachzehrer, a German vampire who devours its own shroud and feasts on its own flesh in the grave while it draws the life force out of its relatives causing them to waste away. The nachzehrer leaves its coffin to visit its family in the shape of a pig and drinks their blood. Its name means "afterwards (nach) devourer/sapper of energy (zehrer)". Myths say that to kill a nachzehrer you have to place a coin in its mouth and chop off its head. The strangest thing about a nachzehrer, however, is that it has the habit of lying in its grave holding one thumb in the opposite hand, always keeping its left eye open.

Poland now, and they have the Upier, a vampire which will steal your heart. It can consume vast amounts of blood using its barbed tongue and will only come out during the hours of noon until midnight. It is supposed to sleep bathed in blood and has an unquenchable thirst. It can be killed in the traditional way of a stake through the heart and beheading. What is interesting about this legend is to become immune a human can mix vampire blood with flour and then eat the blood bread made from this mixture.

The Russian vampire, Strigoii has the same open left eye as the nachzehrer while it is transforming into a vampire after death. Strigoii can shapeshift into cats, dogs and sheep and even handsome young men to prey on young women. The female version is strigoica and these are dead vampires, living vampires are moroii. A stake through the heart is the traditional way of killing one of these monsters.

Then you have the most dangerous vampire of all, the Slovakian Nelapsi who can destroy whole villages at a time. They have two hearts, one for their own soul, one for the soul of the demon that gives them their powers. They are strongest when in a holy place, so no cowering in churches, and if one is climbing the bell tower they can kill with a single glance. They are incredibly strong and fast, their skin is white and tough and their clothes are indestructible. The only way to prevent them rising is to nail their hair, limbs and clothing to their coffin with blackthorn nails while they sleep by day, and then set them and it on fire with holy oil. Even that's not guaranteed.

Moving away from Europe there is the Khang-Shi, a demon vampire from China. They are tall and covered in white or green hair from head to toe. They have huge fangs, long sharp claws and terrible red eyes, all the better to hunt you with. Some of them can even fly. Destruction for these demons comes from lightning, so ask the local thunder god for help, and they can be trapped in their graves by sprinkling rice or red peas, which they must count.

How about the Asanbosam, an African vampire from The Ivory Ghost, Togo and Ghana? This vampire hangs from trees using the hooks it has for feet and grabs you as you walk underneath it. It has iron teeth with which to eat you. Being an equal opportunities vampire, it can be male or female.

Then there's one of my favourites from Japan: the Nukekubi, which means detachable neck. I remember reading about this in a book when I was only a youngster and it stuck with me. During the day these vampires look perfectly normal, but at night their heads detach from their bodies and fly off in search of human prey. They scream at their victims, terrifying them, and then swoop in and bite. Their one weakness is, if the head cannot find the body to reattach by sunrise, they die and the only way to tell one from a normal human during the day is the line of red symbols around the neck where it detaches. Definitely not as easy to spot as the Khang-shi.

To the Philippines next and the dreadful manananggal. By day she is a beautiful woman, by night a flying fiend who preys mostly on sleeping children and pregnant women. She can separate the top of her body from the bottom and sprouts bat-like wings. She drinks her victims' blood using her long, thin tongue which she pushes through the roofs of houses, but she can be repelled by a sting ray tail fashioned into a whip (Buntot pagi). By smearing salt, crushed garlic or ash on top of the standing torso left behind when the manananggal hunts, she can be prevented from reattaching and will then die. 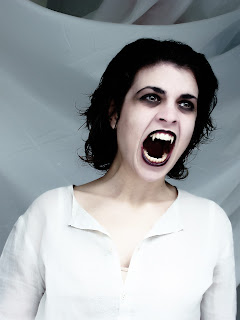 There are many, many more, all just as fascinating and if you wander round the legends of Europe you can find just about every trait of Dracula. The best thing about vampire legends is their diversity; you couldn't ask for better inspiration for fiction.

I often stick with Dracula-type vampires when I'm writing, because often my characters are romantic leads and most of those above are not overly attractive, but I do love to pick up bits from here and there. I write original fiction and fanfic and I have to admit I've explored much more in fanfic. It is my goal to slide vampires into every fandom I have ever written for.

Thank you so much for reading and to thank you for taking the time to visit my blog I have a free story for you. It is adult rated, male/male, post apocalyptic with vampires and demons and quite a bit of sex. Yes I went with the traditional, handsome young man type of vampire because, frankly, I can't see an asanbosam making a very engaging lead character. I will leave the other types of vampire for when I'm writing horror fiction.

Please remember this short story contains adult content and is NSFW. The link goes to my Livejournal because I don't put any explicit content directly on this blog, but there's lots of it over there.

Link to The Trade - when a vampire and a sex demon come together to trade what each needs the sparks are bound to fly.   This story is no longer available for download. I hope everyone who read it for free enjoyed it.

I've also written a short fanfic for you all with more vampires also on my Livejournal:
To Forgive, Divine - R, Abraham Lincoln Vampire Hunter, Abe/Henry
BTW, if you haven't seen this film you should, it's surprisingly good. You can find my review of it here: Review: ALVH

More of my original titles that contain vampires
The Soul Reader Series (two of this series are free from some retailers).

Posted by Tasha Duncan-Drake at 05:36