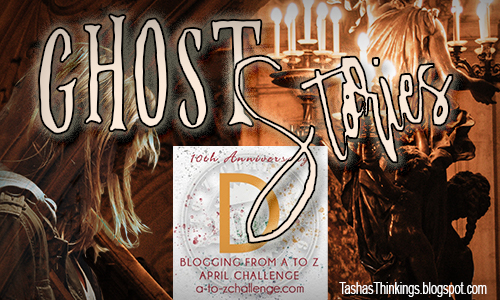 D is for Dockyards

Greetings, I hope everyone is well. Welcome to day 4 of 2019's AtoZChallenge. This year I am writing flash fiction ghost stories inspired by local hauntings in Kent, UK. Some are scary, some are amusing, some are poignant, but all are a little bit spooky! I'm also recording them and putting the sound files on my Patreon blog - some public, some patrons only - so do check them out.

Today's inspiration is the Chatham Historic Dockyards - which, these days are a museum as well as shops and things like that. The hauntings for around the dockyards are numerous and cover the whole spectrum, so it was fun to go with the first thing that came into my head. Be warned, this one gets a bit scary in the middle, so if you're not a fan of scary ghost stories I would recommend you skip this one. Check out A or C instead :)


Being a night security guard at the historic dockyards was a good job as far as Ali was concerned. It paid decently, the office was warm with a good coffee machine, and the graveyard shift gave him plenty of time to get to his lectures during the day and sleep early evening. He always had been a bit of a night owl anyway, so it suited him.

Sam, the older night guard, had shown him the ropes the first couple of nights, but had now gone  back to his earlier shift. Ali had a check list, just in case, but he was pretty sure he had it all down.

There was only one thing about the job that bothered him. Sam had told him about it, and it was right there at the bottom of the checklist: "Do not do rounds between 3 and 3:05am and never open the door then either."

He was pretty sure it was a joke on the older man's part, but Sam had done a really good job of sounding sincere.

Ali was supposed to do a walk round every hour and check all the entrances. Normally that was on the hour, except, it seemed, at 3am. The last two nights, at 3am, Sam had turned up the radio, faced away from the door, and refused to let Ali even look at it. As jokes went, it was a slow burn.

Tonight, Ali didn't have the radio on. He had his laptop out and was making his way through some course work. He was going to be an engineer if it killed him and given how well he was doing at the maths, it might at that. Why his course had a pure mathematician teaching maths to engineers he would never know – the woman made no sense.

He was so wrapped up in what he was doing that when the alarm he had set on his computer went off to tell him to do his rounds, he jumped out of his skin and swore loudly. He reached for his torch and his keys, ready to stand up, when he realised it was the 3 o'clock alarm. Maths had clearly addled his brain.

Looking at the keys in his hand he glanced at the door. What could possibly happen if he did his patrol on time? It was two minutes to 3, he could be out and round and back in the warm by ten past. He almost stood up, almost, but Sam's face kept popping into his head. It also couldn't hurt to wait for a few minutes. If his colleagues had a good laugh at his expense, so be it.

He couldn't help it though, when the clock on his laptop flicked over to 3am, he looked at the door.

The office was small, but well lit, with windows that looked out over the dockyard. It was in one of the old historic buildings, but someone had done it up so it was warm and welcoming to work in. There was a bank of CCTV monitors opposite the windows and, to their left, was the door. It was the only bit that hadn't been modernised, it was still one of those half wooden, half frosted glass doors that had been the thing for sixties and seventies public spaces. There was an old poster, hanging off at one corner, stuck over the glass part.

Ali laughed at himself when he realised he had been holding his breath.

"Nice one, Sam," he said and turned back to his computer.

Not that he was about to go out until five past, he wasn't that person from the horror movie.

It was so quiet he would have missed it if he'd had the radio on. He looked back at the door.

It was definitely coming from the glass.

"Very funny, guys," he said, but not very loudly because all the hairs on the back of his hands and neck had stood up.

It was a joke, it had to be, but something in his gut didn't like it. He was sure it was his imagination, but it felt as if it was colder in the room all of a sudden. He stared at the door, turning his chair to half face it. After twenty seconds of silence he began to relax. He even went to go back to his computer.

The extra tap made his heart pound for no reason he could fathom.

He should have called out, acknowledging they had got him or something, but he sat there, unmoving. The tapping came again and again, insistent and terrifying for no good reason. He couldn’t break the cycle, it just kept going, on and on, over and over. Not loud, but so very urgent.

Five in a row, he couldn't take it.

Ali wanted to sag in relief, but there was no call back from Sam or one of the others on the team. There was nothing.

The door shook with the force of the blow and Ali almost jumped out of his chair. He could not take his eyes off the door as, ever so slowly, bit by bit, the poster's old Sellotape gradually gave up. The corner rolled down further, first a centimetre, then two, millimetre by millimetre is left the door. Ali watched every second until, finally, the last tiny patch of sticky gave up. The poster fell in a flurry of old paper sound, thunking as it was brought up short by the tape on the bottom, before that too let go and it swished onto the floor.

Ali was frozen. There against the frosted glass was a huge black shape, framed by the light in the hallway. It was vaguely human shaped and easily as tall as the door, hulking behind the barrier. It lifted one shadowy arm, pulling it back.

Ali scrambled out of his chair, scooting back behind the edge of the desk, but he couldn't look away.

The whole door shook as if the thing beyond it had hold of it and was trying to pull it from the frame. The lock rattled and the hinges squealed. Ali backed as far from the door as he could get, right in beside the coffee machine.

His logical, engineering brain kept trying to tell him that this was all a trick, a joke taken too far. His primal mind knew far better though. He could hardly breathe, making him flashback to the panic attacks he had had as a young boy after his parents had taken him and fled the war zone their country had become. They'd come to live with his uncle, already a successful business man in the UK, but the nightmares and the attacks hadn't stopped for over a year.

It felt like he was back there, afraid, small and helpless.

He was sure the door was going to give in. It wasn't a reinforced door. They were there to stop vandals and idiot drunks, not anything dangerous. The door wasn't even locked.

That thought made his heart freeze in complete terror. What if the thing just turned the handle?

As if it had read his mind, the door stopped shaking.

Ali began to fold in on himself, sinking down into the space between the front wall and the coffee machine, making his body as small as possible. Still he could not look away. The air felt like it was freezing now, freezing and damp, and he shook from cold as well as fear.

So slowly it felt like an age, the handle began to turn.

Ali could not breathe at all.

The lock clicked open, the door began to move inwards, millimetre by millimetre.

It was like Ali had been hit in the chest between one second and the next. If felt like the lights had gone up and a heater was blasting into the room as he dragged in a huge, gulping breath of air.

For a second he did not understand, then his eyes alighted on the digital clock on the wall: 3:05.

Ali laughed, then he cried, and he stayed in his little nook and shook.

"Dammit, I knew," a familiar voice finally made him look up and he found Sam standing in the doorway. "Should never have left you without a proper explanation. Come on kid, lets get you up and some hot coffee into you."

Ali glanced at the clock and realised he'd been sitting on the floor for nearly ten minutes. His mind still wasn't firing on all cylinders, so he let Sam help him up and feed him caffeine.

"What was that?" he asked when he finally found his voice.

Sam gave him an appraising look and sat down in the other chair.

"Something dead that wants something from us we can't give it," Sam said. "Some say it's a sailor trying to find his way home, some a thief who was murdered by his compatriots on the docks many years ago. Far as I know, everyone is guessing. If we don't acknowledge it, it can't do anything, but if you notice it…"

"I know," Ali said, because he was not revisiting that yet.

"I'll stay with you tonight," Sam said, "and if you come back tomorrow, turn the radio up and keep your eyes on your computer. Got it?"

Ali nodded. He didn’t even want to think about tomorrow night. He'd make that decision in the warm light of day.

For this month I am also recording dramatic readings of all the ghost stories. These are available on my Patreon. Some are public, some are patrons only.
Dead of Night- read by Natasha Duncan-Drake

Please do let me know what you think of the story and leave me links to your AtoZ entries so I can visit you back. I love to chat.
If you were Ali - would you go back for the second night?
Posted by Tasha Duncan-Drake at 00:30