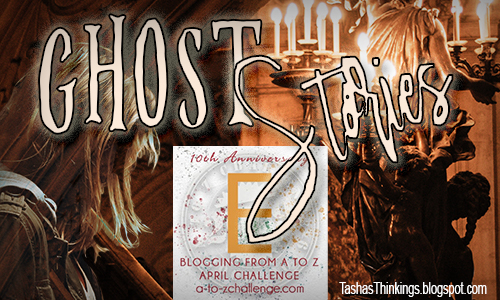 Welcome to my blog and Day 5 of the AtoZChallenge for 2019. I have another short fic for you today to go with my theme of flash fiction ghost stories inspired by local hauntings in Kent. You can also find recordings of all the stories on my Patreon - some posted publicly, some for patrons only.

I have what I hope is an amusing little tale for you today inspired by a ghost sighting in Eastchurch on the Isle of Sheppey. Apparently one night a couple in a car came across a woman in the road wearing what looked like a wool shroud, but when they got out of the car to see if she needed help, she vanished. It was law during the 18th century that everyone had to be buried in a wool shroud, which I had never heard before - so today has taught me something :).

There was a woman standing in the middle of the road. Paul's headlights illuminated her in bright, white splendour.

"What the hell?" Lucy asked, finally looking up from her phone as Paul slammed on the brakes.

Paul just gestured out the windscreen with one hand while putting the car in park with the other.

The woman was staring off towards the side with what looked like a whiteish blanket wrapped around her. She didn't give any indication she realised she'd almost been splatted by a car.

"She looks like she escaped from somewhere," Paul observed.

The woman's dark hair appeared to have dirt in it, and her feet and lower legs were bare.

"Or she could have just run away from some mad man," Lucy said, swiping at his shoulder. "Go and see if she needs any help. I'm calling 999."

Paul glanced back out the front again. He wasn't really sure he wanted to get out of the car.

"What if the mad man is still around?" he asked.

Lucy said nothing and he turned to find a cool stare levelled at him.

"Okay," he said, reaching for his seatbelt.

He knew that stare too well. Usually it meant that if he didn't alter his perspective, he wouldn't be getting any sex for weeks. Paul liked sex. It was an annoying conundrum, because Lucy wielded her power like a weapon.

He opened the door and half climbed out.

"Um, hello," he called, hoping she would just respond.

Maybe they'd driven into someone's re-enactment or such like. You never could tell what went on in the back lanes of Kent.

"Go on," Lucy said, prodding the leg he still had in the car. "See if she's alright."

"Then go to her," Lucy replied.

Clearly there would be no compromise on this one.

Reluctantly he climbed the rest of the way out of the car.  He deliberately left the door open as he stepped round it towards the woman. She hadn't moved at all.

"Hello," he tried again as he moved towards her.

Still nothing. Even when he was only a couple of feet from her, she stared off into the darkness. Paul glanced in the same direction, but there didn't seem to be anything much there. The houses on the road were further up in the other direction.

"Well ask her if she's okay," came from behind him.

He turned to see Lucy half out of the car with her phone in her hand. He turned back and shuffled into the edge of what should have been the woman's line of sight. That was when his brain decided to point out how pale and gaunt the woman's face was. She looked like she hadn't eaten in a while.

"Hello," he tried for a third time because he was British and it seemed polite. "Are you alright? Can we help you?"

On the word 'help' she finally moved. Slowly the woman turned her gaze so it was right on Paul.

"Home," she said and completely vanished.

"Get in the car!" Lucy screeched.

Paul didn't need telling twice. He ran for the car like the devil was on his heels and they were speeding down the road before he even took a deep breath.

"What?" he slowed down when they hit the lights of the village.

"Never mention this incident ever again," Lucy said in even and distinct syllables.


That tone suggested he would never have sex again if he disagreed, so he nodded and kept driving.

For this month I am also recording dramatic readings of all the ghost stories. These are available on my Patreon. Some are public, some are patrons only.
Encounter- read by Natasha Duncan-Drake

Please do let me know what you think of the story and leave me links to your AtoZ entries so I can visit you back. I love to chat.
So, would you immediately tell everyone if you saw a ghost, or would you keep it quiet?
Posted by Tasha Duncan-Drake at 00:30