AtoZ2017 - U is for Ursula, Usurian & Uberwald #AtoZChallenge 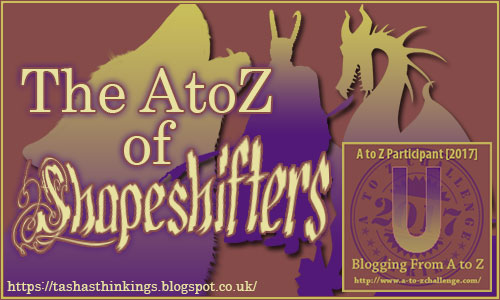 Welcome to Day 21 of the AtoZChallenge and the letter U. Every day in April (except Sundays) I will be making a post about shapeshifters of all kinds. Check back to see my choices and, from time to time some flash fiction too. 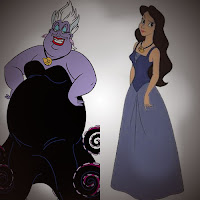 Ursula is a sea witch in Disney's The Little Mermaid and she is downright nasty. She wants to defeat Areile's father, King Triton, and take over Atlantica.

When Ariel comes to her for help to earn the love of Prince Eric, she takes the opportunity to try and sabotage Ariel's chances and hence, bring down the king. She grants Ariel's wish to live as a human for three days, but then changes herself into a beautiful young woman called Vanessa and hypnotises Eric.

Ariel must now not only contend with having no voice and being human, but with Ursula's magic as well. 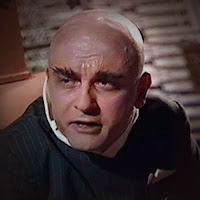 We meet an Usurian in the Doctor Who episode The Sun Makers. Their natural form looks something like seaweed, although they are infact a fungus. With the use of partical radiation they can morph into the shape of a dwarvish humanoid.

They are thoroughly unpleasant in either form.

The Collector works for the Company which has subjugated the earth colony on pluto via economic subversion. As a species Usurians are obsessed with business and profit, caring for it above all else.

Angua is from the wonderful world of Terry Prachett's Discworld and is the first werewolf to be hired into the Ankh-Morpork City Watch. Angua uses her very sensitive nose to track any miscreant that causes problems in her city. For Angua her sense of smell is like coloured lights would be to a normal human.

She can also descern gender and strong emotions, which is very useful when she goes undercover in plainclothes at a crime scene.

When in wolf form she is often mistaken for a dog because most people don't know about werewolves.

Angua is from a nobel house, her father being a baron and her mother a lady. She had three siblings, two brothers and a sister, but her sister is dead, one of her brothers probably did it and the other is stuck in his wolf shape and ran away from home. Angua also ran away from home and eventually came to settle in Ankh-Morpork, taking up her job in the Night Watch.