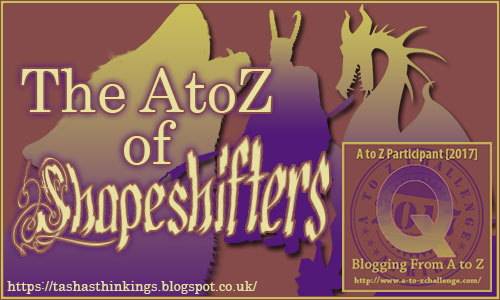 Welcome to Day 17 of the AtoZChallenge and the letter Q. Every day in April (except Sundays) I will be making a post about shapeshifters of all kinds. Check back to see my choices and, from time to time some flash fiction too. 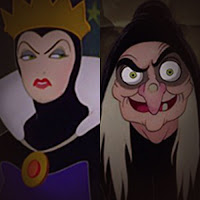 Everyone knows the story of Snow White and my shapeshifter today is her evil stepmother, the Queen from Disney's film adaptation. Obsessed with being the fairest in the land, the queen uses a magic mirror to make sure of her position. However, she watched her lovely growing more beautiful day by day, until eventually the mirror gives the verdict that Snow White is the fairest in the land.

The Queen cannot stand this and plots to have Snow White killed.

We see her shapeshifting abilities when she uses magic to turn herself into an old woman (in the Brother's Grimm version she just uses a disguise) to trick Snow White into eating the poisoned apple.

In this incarnation her end comes when she is chased by the seven dwarves and lightning destroys the pinacle on which she is standing, sending her crashing to her death. Perversely this is merciful compared to other versions where she is tricked into coming to Snow White's wedding and forced to dance in red-hot iron shoes until she dies. 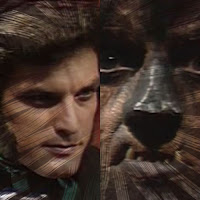 Quentin is the grandson of Edith and Gabriel Collins and so many things happened to him it's hard to keep up. One of these was Magda's curse.

Quentin was married to Jenny, who told him she was from New York, but she was in face a Romany. When Quentin was unfaithful and ran off with another woman, Jenny went mad and was locked in her room. When Quentin returned he was not told and believed she had simply left.

However, she escaped and managed to kill him, but he was restored to life. He then planned to kill her before she could get him again. However, Magda, Jenny's sister, threatened to curse him should any harm befall her sister, so peace reigned for while. However, Jenny escaped again and saw Quentin kissing another woman and tried to kill them both, so he strangled her.

Magda made good on her promise and curse him and the first born of every generation to be a werewolf. Quentin was uncontrollable in his werewolf form and killed many people. He tried a cure, but made everything worse and became even more dangerous. Eventually he had a magical portrait made that turned into the werewolf instead of him, and also aged instead of him, so he became functionally immortal.