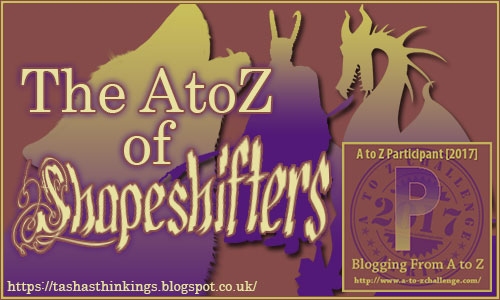 Welcome to Day 16 of the AtoZChallenge and the letter P. Every day in April (except Sundays) I will be making a post about shapeshifters of all kinds. Check back to see my choices and, from time to time some flash fiction too. 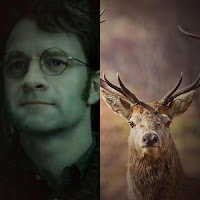 We've had Harry Potter werewolves already, now we have an Animagus. James Potter, father to Harry and one of the Marauders.

His animal form is that of a stag, hence his nickname of Prongs. Along with Sirius Black and Peter Petigrew he learned to become an animagus so they could all keep their friend Remus Lupin company on the nights when he turned into his werewolf form.

James was something of an arogant whatsit when he was at school and what he and the other Marauders did to Severus Snape was unforgivable. However, he must have matured well because otherwise a sensible girl like Lily Evans would never had had anything to do with him.

He was betrayed by Peter Pettigrew and murdered by Voldemort along with Lily because of the prophecy about Voldemort and Harry.

I could not find a werewolf for P, so I have written some flashfic for you instead.

P is for Paul
part 2 of Curses
by Natasha Duncan-Drake
(each part can be read seperately, but if you read them in order they build on each other - there will be 4 parts [Nicky, Paul, Xerxes & Yani])

Paul could not believe the situation he had managed to get himself into. He didn't remember much after the lorry had hit him, but some good Samaritan had clearly brought him to a veterinary surgery. The drugs had worn off during the night and he could easily have broken out of the cage, but the CCTV camera was pointing right at him.

He had no choice but to wait it out for a chance to escape.

He was listening to the clock tick when he smelled alpha bitch. Half of him wanted to turn over and show his belly and the rest wanted to puff up like a peacock. He only just managed to keep himself in check.


"I am so sorry," the woman who burst through the door said, "I had no idea."

That confused him, she had to be from a weak line not to have realised he was a werewolf like her.
"Oh my god, your leg!"

He had noticed that his back left leg was missing from the knee, but he wasn't worrying about that. He growled a little before she could become hysterical. It was frustrating not being able to talk.

"I've turned off the CCTV."

That was one thing at least. When she just stood there he tapped his foot on the cage floor. He had never thought his short stint in the Scouts would be useful for anything, but apparently Morse code was useful outside of the movies. He tapped out the universally recognised sign for "S.O.S".

"Oh, oh," the woman said, "Morse code. Um, I don't know Morse code ... but I bet there's an ap for that."
She pulled a smart phone from her back pocket and quickly began tapping at it. Paul waited.

"Okay, go," she said, holding the phone towards him.

"Can you take this muzzle off?" he tapped out and the ap dutifully translated.

It was irritating him.

"Oh god, of course, yes," the woman said, fumbling with the cage. "I cannot believe I amputated your leg. If I'd known I would have set it, but it was so damaged."

"It will grow back when I transform," he told her, since she seemed so worried about it.

"Really?" she asked as she pulled at the strap on the muzzle.

He reassessed her again. If she wasn't used to werewolf healing she had to be from a very, very weak line. Some werewolves were left with scars from wounds, but most could heal anything except life threatening injuries. His line was very strong, if he could just get back to human everything would be back to normal.

"What pack are you from?" he asked, tapping out each letter even as he yawned to loosen his jaw.

He didn't get it.

"You're packless?" he asked.

Werewolves did not do well without packs.

"I suppose so," she replied, "but I've only been a werewolf since yesterday, so I don't know how these things work."

Paul sat down with a thump.

"I'm guessing that's not a good thing?" the woman said.

Paul couldn't form a coherent thought, let alone tap anything out in Morse code. Two facts were warring for dominance in his brain: first he had just broken so many rules he couldn't even think of them all; second he was only twenty two, he shouldn't have had the power to turn a human into a werewolf, let alone by accident.

"Are you okay?" he finally managed to communicate.

Werewolves always shifted for the first time when the moon rose after they had been bitten. It hadn't been a full moon, but that was just legend.

"And everyone else?" he had to ask.

"My kids think it's amazing," was the surprising reply.

New werewolves were not usually the most stable of creatures. He gave up trying to rationalise what was going on.
"Can't you turn back?" the woman asked.

Even his Morse code sounded terse and annoyed.

Many thanks for reading, I hope you are enjoying the fic.
See you tomorrow for Q.