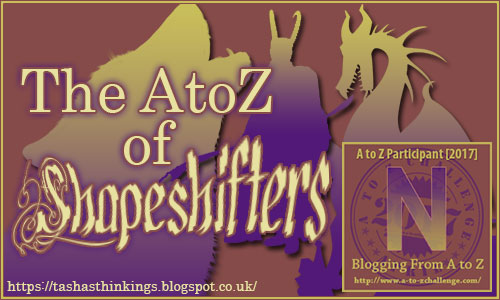 Welcome to Day 14 of the AtoZChallenge and the letter N. Every day in April (except Sundays) I will be making a post about shapeshifters of all kinds. Check back to see my choices and, from time to time some flash fiction too. 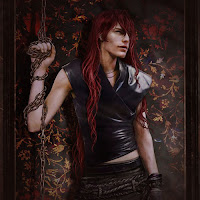 Nathaniel is from the Anita Blake books and he is a wereleopard. He had mahogany auburn hair and lilac eyes and is on the pretty side of handsome. He's also a submissive and a stripper at the Guilty Pleasures club.

Nathaniel comes from an abusive background. He ran away from home at the age of seven after seeing his brother beaten to death by his abusive step father. He then became a child prostitute and was addicted to drugs for a long time.

Gabriel, the then Nimir-Raj or the wereleopard pard found him, turned him and cleaned him up, but Nathaniel was already completely submissive and a mascochist. When we first meet him he has absolutely no ability to say no.

Over his time with Anita he learns some self-confidence and how not to give in to his wilder masochistic tendencies. He becomes Anita's animal to call in her second triumverate with Damian and is part of a menage a trois with her and Micah. the new Nimir-Raj of the pard.

Nathaniel is one of my favourite characters from Anita Blake, he is just so interesting, even if there are sometimes whole paragraphs devoted to the colour of his eyes :).

I could not find a werewolf for N, so I have written some flashfic for you instead.

N is for Nicky
part 1 of Curses
by Natasha Duncan-Drake
(each part can be read seperately, but if you read them in order they build on each other - there will be 4 parts [Nicky, Paul, Xerxes & Yani])

The bed was really cold ... and hard.

Nicky opened her eyes and tried to force her sleepy brain to make sense of her surroundings. The reason for the issues with the bed became apparent very quickly: she wasn't in bed. She was curled up on the bathroom floor ... naked.

"Darling, are you awake?" came through the door.

"Yes," she replied, looking around and trying to figure out why on earth she was sleeping in the bathroom.

In her head there was an empty space. She'd only passed out drunk once when she was seventeen and decided never to do that again. That and the fact she remembered the after effects being much, much worse, led her to conclude that was not the explanation.

"Great, because the kids really need to get ready for school."

Nicky pushed herself to her feet and almost hit the sink behind her as she misjudged her own strength. Something very weird was going on. Luckily she had left her bathrobe on the hook last time she had had a shower, so she grabbed it, put it on and opened the door.

"Why was I sleeping in the bathroom?" she asked, even as her youngest, Lilly, dashed past her.

"You seemed to want to," her husband Archie said, with a smile that was kind of conflicted.

"Lil, no!" William wailed as he saw his sister had claimed the bathroom first.

Lilly smiled around her toothbrush and slammed to door. At least some things were normal.

"I think this needs coffee," Archie decided and gently took Nicky by the hand and led her towards the kitchen.

"What's going on?" she asked, even as she sat down at the breakfast bar.

"Darling, I don't think the wolf dog that bit you yesterday at work was any kind of dog at all," Archie said after pouring them each a mug of dark, caffeinated liquid.

Nicky sniffed hers and carefully pushed it away, hoping her husband would not notice. It smelled way too strong.

"Why?" she asked, doing her very best to keep calm.

"Um," Archie was clearly struggling with something. "Nicky, you're a werewolf."

"Last night you finished dinner, went up to the bedroom and changed into a wolf," her husband told her. "Then you came downstairs, played with the kids for three hours (they think it's awesome by the way), chewed up one of the sofa cushions and decided to sleep in the bathroom."

"That was past their bed time."

It was the only thought that made sense in her head.

"Yes, well, Darling," Archie said, "I didn't feel like arguing with you."

Nicky could understand that.


"Oh my god," she said as one thought led to another, "I have a drugged up werewolf in a cage in my surgery."


I hope everyone is still enjoying the AtoZ.
See you tomorrow!