AtoZ2017 - B is for Bruce Banner & Sylvie Baker #AtoZChallenge 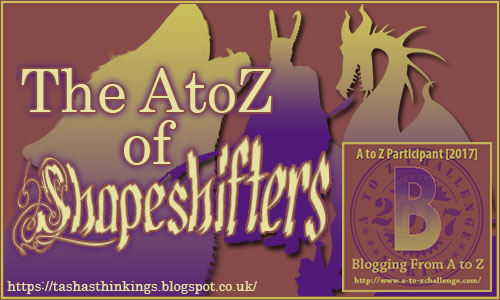 Welcome to Day 2 of the AtoZChallenge and the letter B. Every day in April (except Sundays) I will be making a post about shapeshifters of all kinds. Check back to see my choices and, from time to time some flash fiction too. 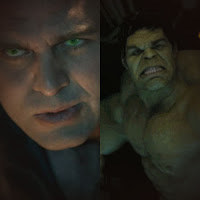 "Don't make me angry, you wouldn't like me when I'm angry."

For anyone who grew up in the seventies those words are iconic. Of course he happens to be David Banner in that, rather than Bruce. So the Banner I am really refering to is from Marvel Cinematic Universe. Played by the wonderful Mark Ruffalo, his icon is line is:

Created by experiments with the super soldier serum used to created Captain America and gama radiation, the Hulk is a "Giant, green rage monster" that emerges when Bruce becomes overly emotional. If he is hurt or loses control, his calm, even tempered human mask falls away to reveal the very dangerous creature inside. He is all but indestructable, as General Ross has discovered on more than one occasion.

However, it has been shown on more than one occasiona that Hulk is in no way mindless, as first thought. But he definitely has impulse control and higher thought issues.

He's an awesome character that Mark Ruffalo brings to life in a way that hasn't been done so well since Bill Bixby in the 70s.

Sylvie is an alpha werewolf from the Anita Blake series of books. She is the Geri, or second in command, of the local werewolf pack, and as such is someone not with whom to mess.

She is a good friend to Anita, the main character, and she is very loyal, but has something of a violent streak. She keeps a collection of the bones of her enemies, which comfort her.

Sylvie is also of the lesbian persuasion, having dated Gwen, another werewolf and a psychiatrist, that we know of. She did declare she wasn't a lesbian in one book, but I'd put that down to the author forgetting a significant point over something that happened in the plot. We've all done it right? That's why we all need good editors ;).

Sylvie is one of those characters that sticks in your head because she is that little bit interesting, even though she doesn't always have a huge part in the books.


I hope you liked my choices today.
Many thanks for visiting, do come back!