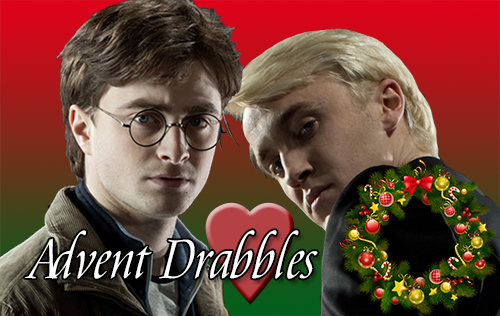 Welcome to days 15 of Advent and my drabble today continues the story. Click here to see the other part.

Revelations in a Broom Cupboard pt 15

What About Astoria? (Advent Drabble 15)

Fandom: Harry Potter
Pairing: Harry/Draco
Rating: PG
Disclaimer: This story is based on characters and situations created and owned by JK Rowling, various publishers including but not limited to Bloomsbury Books, Scholastic Books and Raincoast Books, and Warner Bros., Inc. No money is being made and no copyright or trademark infringement is intended.
Warnings: canon compliant only to Deathly Hallows, EWE
Author's Notes: Thanks to Soph for the beta.

Harry didn't bother to reply, he just grabbed Draco and dragged him into a fierce kiss.

"Just one question," he said as they broke apart, "for this to work, wouldn't Astoria have to like me as well?"

"You'd be surprised how many relationships don't require like," Draco replied, "but you don't have to worry. When I told Astoria who I was seeing, she was over the moon."

Harry had to stop and mentally assimilate that, because pureblood sensibilities took getting used to.

Link to all parts
Posted by Tasha Duncan-Drake at 08:06