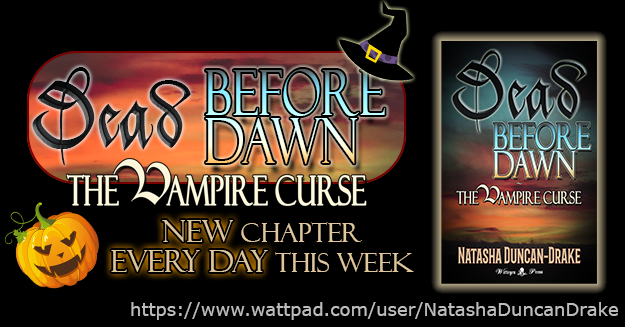 To celebrate Halloween, this week there will be 7 new chapters of

Dead Before Dawn: The Vampire Curse

Chapter 11 - Not Quite Free
Max is still stuck in Russia and the hunters may not have given up as easily as he had hoped.

Max Statton is in Moscow for the premiere of his new movie when a terrifying encounter turns his life on its head. Attacked by one of the city's resident vampires, Max is bitten and infected. Only a team of local vampire hunters prevent him being dragged into the underworld of the undead.

Fighting for his very existence, Max must resist the vampire curse trying to take over his body if he is ever to get back to his life.

I am very much enjoying posting Dead Before Dawn over at Wattpad. My number of followers keeps going up, which I am taking as a good sign :). So does the read and vote count on the novel.

Here's hoping everyone is enjoying reading as much as I am posting.

Wattpad is definitely not a post and run site from a writers perspective - it's much more a social media hub as well. I keep looking at the clubs, but the one that is supposed to be for chat seems a little, well, random and I have no idea what to post. So so far I have stuck to the genre specific places.

Anyone have experience with the Wattpad clubs? Where is it best to hang out?

I need to get my arse in gear and read some other people's work - I have gotten behind on that recently because I've had so much else to do.
Posted by Tasha Duncan-Drake at 09:28