10 Awesome Classic Horror Films That Are a Must See 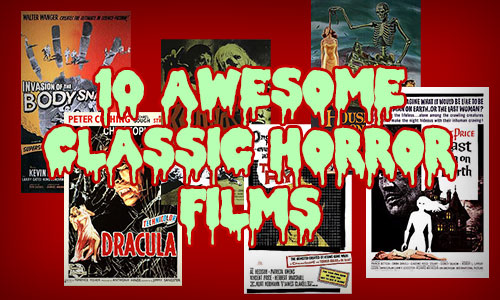 There is nothing quite like a classic horror film. For classic I'm counting everything from the early cinema to the 60s and maybe the early 70s because it was before the era of the slasher movie. My favourites of the genre are mostly from the late 50s and early 60s, but anything is fair game.

This is an era where the films could not rely on CGI special effects. They had makeup, some of which was iconic, but the rest was done with lighting effects, scenery and, most important of all, plot.

I don't suppose that anyone envisaged that horror films would give anyone a warm, cosy feeling, but some of these titles do just that for me. Many of them I first saw as a teen and, I have to admit, they don't really scare me anymore, but they did the first time I saw them :).

I would love to know which are your favourite classic horror movies, please comment and let me know.

When it comes to Peter Cushing and Christopher Lee and horror films, I always think of them in the same thought, even though they both did plenty of films without the other. It's all this film's fault. They go together like bread and butter because of Dracula.

To me this is the classic Dracula. I know a lot of people always think Lugosi, but I'm not all that fond of the 1931 film. Christopher Lee will always have the honour of being THE classic in my head.

The scene with the crossed candle sticks and Dracula's foot just disintegrating in the light will always stay with me. It is one of those things that is etched in my head. It was so brilliantly done.

I hadn't actually seen this until recently and had no idea that the Will Smith movie, I Am Legend was based on the same book.

This classic is of course a much gentler film than the Will Smith version and stars the ever brilliant Vincent Price (he'll pop up again :)).

Now if there is an iconic classic voice for horror it has to be Vincent Price. I mean Michael Jackson chose him to voice over Thriller, so that should tell us everything.

In The Last Man on Earth, Price carries the entire film because he's the only really sentient character until right up to the end. He narrates the film as we watch him and it is brilliantly done. Very definitely worth a watch, just for that.

Okay, so yes, another vampire movie, but this one makes it in because it's a little different. No blood drinking fiends this time, but youth sucking instead.

Kronos is played by Horst Janson and comes to the aid of an old friend whose community is losing young girls to something horrible. He is a professional vampire killer.

This film has everything: the fearless vampire hunter, the beautiful girl, the fearful local and the haughty nobles, any of whom could be the vampire.

I love the end of this film, it is just so well done and set up. There are sword fights and hideous monsters and everything you could want from a classic horror movie. This is one of my favourites to watch over and over again.

I told you Vincent Price would be back and here he is throwing his wife a haunted birthday party.

It's the wobbly skeleton and the vat of acid that win it for this one.

This is a story all about a haunted house, only it's really about murder and manipulation. Price is as intimidating and strange as ever as we are led to believe he is a psychotic madman.

This is a great film if you like an ominous soundtrack and lots of bad effects. It's definitely a classic.

This film is here for me for one reason and one reason only - the scene with the little girl. It is the part that has stayed with me over the years even as I have forgotten the details of the rest.

Boris Karloff gives the monster such humanity even with his classic monstrous look. He makes me cry every time and the scene with the little girl is heartbreaking.

In many cases I prefer the later remakes to the black and white classics, but in this case, the 1931 film wins hands down.

Invasion of the Body Snatchers (1956)

I remember first seeing this film on BBC2 after school, probably on a Friday early evening, because that's when they showed a lot of these classics.

Kevin McCarthy and Dana Wynter are brilliant exampled of the sci-fi invasion classic couple, where they come together as they realised something very strange is going on.


It rankles a bit these days that, of course, it was the woman who gave them away in the end, but this is still a great film. The way it's all about staying awake so they can't get you.

It's such a simple thing, something we can all relate to on the long drive home, or just one more episode of The Blacklist, and so we all know how hard it can be. I'm pretty sure I checked under my bed for pods for quite some time :). 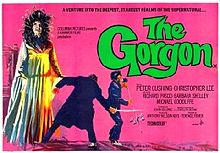 This has Christopher Lee and Peter Cushing again and a great performance by Barbara Shelley.

In a small German village people are being murdered: turned to stone. Only the authorities are covering it up. So not only do we have a creature out of mythology terrorising the community, but the people in charge are lying about it - this is made for tension.

How a Greek monster ended up in a German castle is anyone's guess, but I like this film because it's not just simply, the monster and the hero battling it out. There are other layers in there.

Vincent Price is in this one again and although Patricia Owens gives a great performance as Helene, the woman who kills her own husband with a hydraulic press, neither of them are why this film makes it onto my list.

That is still clear in my memory and has been since the day I first saw this movie. Yes the remake is edgier and more horrific, but that scene from the original makes me shiver.

Yes, it's Vincent Price again  and he is the reason this film makes it into the pack.

The film is part of the Roger Corman series based on the works of Edgar Allan Poe and this is my favourite of the set.

This is a film all about the elite and their vices and their abandonment of the masses. Prince Prospero is a Satanist and tyrant, burning a whole village and abducting a young woman just to play his games.

He believes that the Red Death, a plague devastating the countryside will pass him by because of his power and allegiances. Of course he is wrong and Price gives a great performance as Prospero and Death. The whole air of this film is heartless and twisted and the ending it simply just.

This one makes it onto my list because it has twins in it and Peter Cushing playing a very horrible man. I'm a twin so it always fascinates me to see how people write them :).

The twins in this case are played by Mary Collinson and Madeleine Collinson: one is good and one is bad, just the way it should be. In case you are wondering, when it comes to me and my sister, I am the evil twin ;).

After the death of their parents, Maria and Frieda are sent to live with their puritanical uncle, Gustav (Cushing) in Karnstein. The local count is the only one who will defy Gustav and his band of puritan men who burn anyone they suspect of witchcraft.

This does not make Count Karnstein the good guy however, and in his boredom he wakes his vampiric ancestor with black magic and is turned himself. Frieda becomes fascinated with him and also becomes a vampire like him.

Of course it can't end well.

And there you have it, my list of 10. What are your favourite classic horror movies? 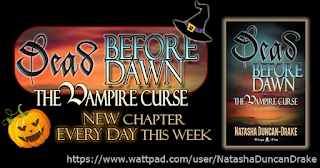 Also this week I am posting a new chapter of Dead Before Dawn: The Vampire Curse every day.
It's totally free to read and we're up to chapter 13 as of today.

Max Statton is in Moscow for the premiere of his new movie when a terrifying encounter turns his life on its head. Attacked by one of the city's resident vampires, Max is bitten and infected. Only a team of local vampire hunters prevent him being dragged into the underworld of the undead.

Fighting for his very existence, Max must resist the vampire curse trying to take over his body.