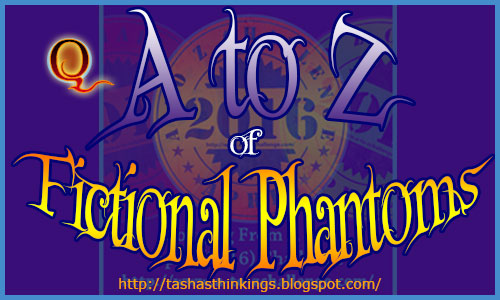 Welcome to my Fictional Phantoms, day 17 and to the letter Q. Now I had trouble thinking of Qs to begin with, but then found two phantoms, one whom many of you will know, the other, I suspect fewer with know about. I hadn't heard of her until I went searching :).

Peter Quint (The Turn of the Screw)

Peter Quint is a character from Henry James' novel The Turn of the Screw. In it he is very simply the root of all evil.

Peter Quint was a servant of the master of Bly, a large country house. However, in life he thought himself above his station and was a corrupting force. He is handsome but dastardly.

He was having a sexual relationship with the governess, Miss Jessel, of Flora and Miles, the niece and nephew of the owner of Bly. He also took control of the house when the master was away.

Quint and Jessel both died, but they are far from gone. Quint still has much influence over Miles, even though the boy denies it over and over. However, Quint was the reason Miles was expelled from school and Quint continues to use the boy, even as the new governess tries to protect him.

The Queen is actually a Countess who is 87 years old. She knows the secret of the winning cards, three cards which when bet upon will allow the person making the bet to win a fortune.

Hermann, an officer in the engineers in the Imperial Russian Army, learns of the secret and threatens the old lady with a pistol to make her tell him the truth. She dies of fright.

At her funeral Hermann see the countess open her eyes and later her ghost appears to him. She tells him the three cards: Three, seven, ace. Then she orders him to play once each night and then to marry her young ward.

Hermann does so and on the first and second night he wins, but on the third he find he has bet on the Queen of Spades and loses everything. The Queen looks almost exactly like the Countess and winks at him, at which point he runs in terror and goes mad. All he will ever say from then on is: "Three, Seven, Ace. Three, Seven, Queen."

The Countess got her own back and saved her ward from a loveless marriage.

Do you think there could be ghosts out there that are pure evil? How about ghosts that return to right wrongs done them in their life?