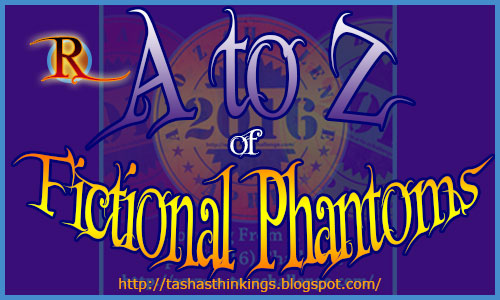 Welcome AtoZers and all other visitors, I hope your week is going well and you are ready for another fictional phantom. Today I have gone with a creations of the wonderful Stephen King, so beware, this is a scary one. Enjoy!

Rose Red is Stephen King's first written for television mini-series, rather than being an adaptation of one of his books, and it is up there are my favourite, right along side 'Salem's Lot.

The antagonist in Rose Red is actually Rose Red itself: the house. However, the power behind Rose Red is Ellen Rimbauer.

She started off as a perfectly normal young wife of an older philandering man. Doing her duty she produced two children for him and turned a blind eye to his womanising and he gave her Rose Red.

After suffering a nearly deadly fever on their honeymoon, from an unspecified sexually transmitted disease given to her by her husband, Ellen became very close with her maid Sukeena. Sukeena would help Ellen in her future enterprises.

Back in the US Ellen consulted a medium who told her as long as she continued to build Rose Red, she would never die.

It was after that the house began to eat people, although it had killed before during its initial construction.

Men it tended to simply kill, her unfaithful husband being one of them, and women, including April, Ellen's six year old daughter, just vanished.

Ellen herself vanished into the house with Sukeena never to be seen again, but she is still building it with all the women she has taken. She can look beautiful to those she is trying to temp to join her, but she is really a decayed thing obsessed with her house. A ghost in a shell who became a monster with horrific supernatural powers.

If someone told you that as long as you kept building your house you would never die and money wasn't an object, would you do it?