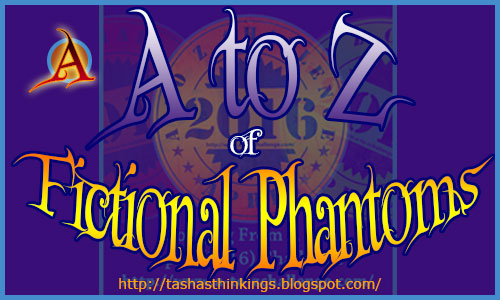 Hello and welcome to my blog on the 1st day of the 2016 AtoZChallenge. Today I have two rather nasty spooks for you in my Fictional Phantoms theme. You definitely wouldn't want to meet either of these on a dark night, or any other time for that matter. 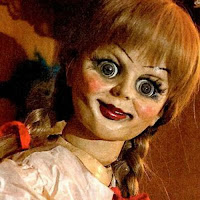 Annabelle is a haunted doll, or rather a doll which is a gateway for a demon to enter the living world introduced in the film The Conjuring. The demon tricks people to invite it in by pretending to be the spirit of a girl. After being taken by Ed and Lorraine Warren, paranormal investigators she lives in a blessed glass case to keep her from harming anyone.

In the spin-off film Annabelle we find out she was once a normal doll, but became possessed when she was clutched in the arms of the murderous Annabelle Higgins as she died. 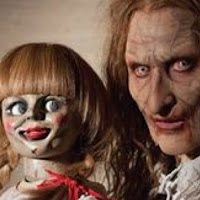 Annabelle Higgins was a demon worshipper and murderess whose last act on earth was to kill herself and summon a demon with her own blood. She and the demon then both possessed the doll, causing mayhem.

This is one doll you do not want to play will.

The film version of Annabelle is based on a real doll - you can read all about her here.

Aka Manto is a Japanese urban legend and a nasty spook he is too. He gets you when you are least expecting it: when you are sitting on the toilet in a public rest room!

A voice will ask if you want:

BEWARE!
Your only hope it to answer 'no paper' because then he'll go away. If you try to trick him by picking another colour entirely you will be dragged to the netherworld, never to be seen again!

There are other versions too involving a cape or vest which are just as nasty and can be read at wikipedia.

So haunted dolls, better or worse than clowns? What would you think if a disembodied voice suddenly started asking you about toilet paper in the public loos?