From Fanfiction to Published Book (If 50 Shades Can Why Can't I?) #WriterlyWednesdays 25 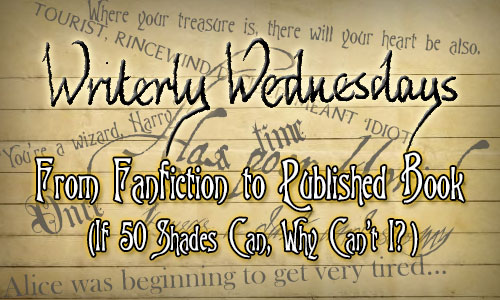 From Fanfiction to Published Book
(If 50 Shades Can Why Can't I?)

Everyone knows that 50 Shades of Grey started out life as a Twilight fanfiction, well nearly everyone anyway :). So of course the question comes up, if 50 Shades can become a huge hit, why can't I turn my little fanfiction epic into a book too. The answer is, of course, that you can. You just have to make sure on one thing:


Take out everything that does not belong to you before you publish.

There is nothing inherently wrong with turning a fanfiction into a published book, no matter what people say. Every fanfiction has a lot of original work in it. What you have to be able to do is separate what is yours from what belongs to the original creator(s) and then fill in what you have left so that it makes a rich story that readers will enjoy.

However if you start off with a 100K word Harry Potter epic set in the canon universe, you're going to have a lot more trouble turning it into something you can publish.

For example, I have a Harry Potter story called Gold Tinted Spectacles (those waiting for the sequel - it's coming, promise, the new book launch just took priority :)). It is as follows:
Hence I could take the bare bones of the plot and the major concept, but by the time I ripped out all the canon there wouldn't be a huge amount left. Frankly, at that point, it's easier to start all over again and write a new story with the one concept from the fanfiction that is usable.

That being said, my latest book The Machine: Rise of the Gifted (99c until next Wed) started off as fanfiction.

I've mentioned this before in other places, but not here so I shall elaborate.

Once upon a time, The Machine: RotG was an unfinished Seaquest DSV fanfiction languishing in a note pad in a forgotten drawer. The lead in the story was Timothy O'Neill (Ted Raimi) a more minor character in the show, but my favourite because I always go for the geeks.

It stayed mostly forgotten for many years until I was going through things and happened to find it. By then (2010ish) I was in Ice Skating fandom and thought to myself, ooh, that's not a bad plot and I began re-writing it.

As you can guess it once again ended up on a back shelf - this time virtually, in a directory on my hard drive.

It wasn't until 2012 it saw the light of say again, when I needed ideas for the Giveaway Games. I did a compete hatchet job on it to remove any actual events and people and it became one of the stories we gave away that summer.

Then, last year, I was leafing through Myriad Imaginings (the anthology we eventually published of all the stories) to re-edit it into a better format and thought the story needed some more love. So I pulled it out, let the ideas percolate in the back of my mind for a while, and then re-edited it and added an extra third to the book to create something to be proud of.

Then my editor got hold of it and tore out two scenes and told me to rewrite them, as well as pointing out where I had left things out, and it got even better :).

The end product bears very little resemblance to that little fanfiction scribbled in a notepad, but that's where the original inspiration came from.

If something inspires you, let it. Just make sure, if you come to publish it, that you haven't stolen anyone else's copyright :).

What inspires you? Do you ever write fanfictions in your head, even if you don't put them on paper? 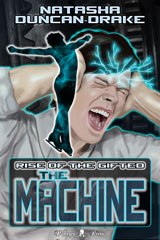 The Machine: Rise of the Gifted
by Natasha Duncan-Drake

Rafe Derouet used to be a world class, British figure skater competing against his arch rival, flamboyant American Louis Hayes. A catastrophic knee injury ended his career and now all he can do is look on from the sidelines, commentating where he used to be a star. He hates Louis and wants nothing more than to see his nemesis go down in a blaze of failure.

Then mysterious men in black with guns take over a press meet, trying to arrest Louis, awakening something dangerous in their target, and setting in motion events they cannot control. Most shocking of all, Rafe finds out Louis can literally read his mind.

Dragged into a murky world of government agents and x-files by one of those x-files, Rafe finds his world view completely changing. And, along the way, his hatred for Louis proves to be something else entirely.

Now Rafe just needs to survive so he can decide what to do about it.