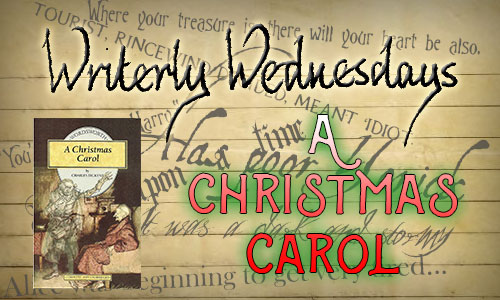 It is not Christmas unless I have seen A Christmas Carol at least once, preferably several times in several incarnations. So of course I had to talk about it for Writerly Wednesdays 18. Quotes are thanks to this Goodreads page.

First of all I have to admit I am not usually a Dickens  fan. Probably because of being forced to read him at school, but I find most of his stories tedious. Oliver Twist is okay, but A Christmas Carol is the only one I really, really love.


"Marley was dead, to begin with ... This must be distinctly understood, or nothing wonderful can come of the story I am going to relate."

I suppose the fact it is a ghost story helps and Soph tells me I need to read his other ghost stories, because they are great too. However, I think it's the whole redemption arc that really does it for me. This story is the epitome of Christmas. It takes an old miser of a man, whose heart is all but shrivelled and not only brings him to wish to help others, but returns to him not only the joy of Christmas, but the joy of life.


"Come in, -- come in! and know me better, man! I am the Ghost of Christmas Present. Look upon me! You have never seen the like of me before!"

The other thing I have to admit is I rarely read it, I watch all the adaptations I can get my hands on. I love that there seem to be some quotes that have to be included no matter who is playing Scrooge. If the quotes aren't there, even a little doctored, it's just not A Christmas Carol :).


"If they would rather die, . . . they had better do it, and decrease the surplus population."

Scrooge really is a horrible, horrible man at the opening of the book. We despise him. Yet as he meets the Ghost of Christmas past we see the begins of the reason for his descent to this state in the neglect of his father and the loss of his sister. He becomes a man obsessed not with humanity, but with money, folding in on his own greed.


"If I could work my will," said Scrooge indignantly, "every idiot who goes about with 'Merry Christmas' on his lips, should be boiled with his own pudding, and buried with a stake of holly through his heart. He should."

Then we have Bob Crachit, Scrooge's ill treated, under paid clerk, who, even though his circumstances are dire, is still a happy, giving man. Where as Scrooge's nephew Fred is the opposite of his uncle, Bob is the real foil, the man who has to stand up to Scrooge in small ways all the time, although he manages it rarely. And of course with Bob comes his family and Tiny Tim, the personification of goodness in the story. Forgive me, but in some adaptations I do find Tiny Tim just a tad annoying :).


"He told me, coming home, that he hoped the people saw him in the church, because he was a cripple, and it might be pleasant to them to remember upon Christmas Day, who made lame beggars walk, and blind men see."

My favourite filmed version of A Christmas Carol had to be the Patrick Stewart version with Richard E. Grant as Bob, closely followed by Scrooge staring Alastair Sim. The Muppet Christmas Carol is such fun to watch and so is the musical Scrooge with Albert Finney and Alex Guiness. However, I do have to admit that I think Mickey's Christmas Carol cut out too many of the important parts and missed a lot of the point of the story. The Disney version with Jim Carey is much better, but still not as good as some of the others.


"It is required of every man,” the Ghost returned, “that the spirit within him should walk abroad among his fellow-men, and travel far and wide; and if that spirit goes not forth in life, it is condemned to do so after death. It is doomed to wander through the world—oh, woe is me!—and witness what it cannot share, but might have shared on earth, and turned to happiness!"

Then of course we have the modern re-tellings and the use of the story, but with different players and plots. My favourite of these is the one with Ross Kemp as Eddie Scrooge (2000), a mean loan shark in London who is shown the true meaning of Christmas. I also remember really enjoying Ms. Scrooge with Cicely Tyson when I managed to catch it once. Of course I couldn't leave this section without mentioning Scrooged with Bill Murray, however, I am going to cause trouble now and say I don't like it that much, I love the ghosts, but I think Bill Murray's ego got in the way of some of the other parts. It's entertaining, but I think there are much better re-imaginings.


"And so, as Tiny Tim observed, God bless Us, Every One!"

So there you have it, my fav (almost) secular story of Christmas. Merry Christmas to one and all, I hope your holiday preparations are going well if you are celebrating, and that you are enjoying the good will this season tends to bring out even if you are of a different persuasion.

So are you a fan of A Christmas Carol? Which is your favourite version or re-telling?

Posted by Tasha Duncan-Drake at 07:50