AtoZChallenge2015 - S is for Sutekh

Hello and welcome to day 19 of the AtoZChallenge 2015. 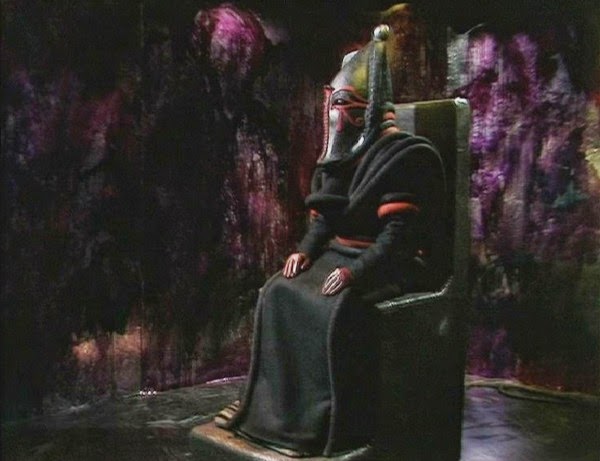 Once again I have chosen an alien with godly delusions. Historically Sutekh is an ancient Egyptian god of the desert, storms, disorder, violence and foreigners, also know as Set. However, the incarnation I have chosen to talk about is from Doctor Who in the seventies, the Tom Baker years. In the episode Pyramids of Mars, the Doctor and Sarah Jane are forced to land the Tardis after seeing a visions of a jackal-like head that interrupts their flight path.

This is Sutekh as he finally finds himself a minion in the form of Dr Marcus Scarman, who has just entered a burial chamber inscribed with the Eye of Horus.

Sutekh is an Osirian, an advanced race that have long since gone exticnt. He is also known as Sutekh the Destroyer and wipes out all life where he finds it. His own people were so appalled by him they ganged up with Horus to imprison him. Unfortunately they didn't kill him because they didn't believe in that.

The only thing that saves Earth is the time it takes radio waves to get from Mars to Earth. The Doctor is able to get back in time and alter Sutekh's time tunnel to far into the future, even further than an Osirian can live.

Pyramids of Mars is one of my all time favourite episodes of Doctor Who. It combines my love of Egyptology with aliens and danger and Victorian country houses. Below is a clip of Sutekh introducing himself.

Are you a Doctor Who fan? Have you seen this episode? Are you a new Who or old Who fan or both?