AtoZChallenge2015 - R is for Raiden

Hello and welcome to day 18 of the AtoZChallenge 2015. 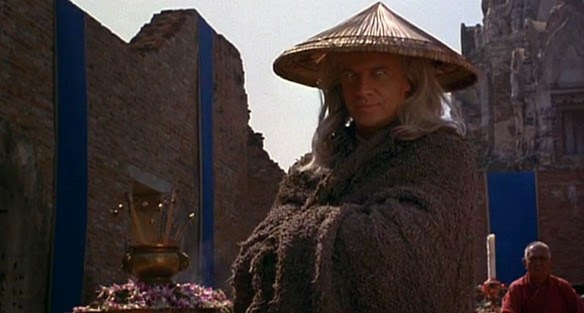 I really only know Raiden from the Mortal Kombat films since I don't play the video games and haven't read the comics, but Raiden gets around.

Raiden is my second god of Thunder (and not my last :)). He is the protector of the Earthrealm and he can teleport, control lightning and fly. In the film Mortal Kombat, where he is played by Christopher Lambert (left), he is seen to almost travel by lightning.

In the first Mortal Kombat film Raiden  mentors the champions of Earthrealm so they can fight in Mortal Kombat and win, thus saving the earth from being taken over. He is not allowed to fight in the tournament, only make sure the forces of Shang Tsung do not cheat.

In the second film he's more hands on and get to kick arse at times and he ascends to become and Elder God at the end.

I like Raiden because he's unassuming until you piss him off and he has a wicked sense of humour.

If you are a game fan, Raiden is also one of only a few characters who have appeared in every incarnation of the game as a playable.

If you would like to know more about Raiden in all his incarnations check out my sources for more information.

Mortal Kombat is undeniable a cheesy fantasy martial arts movie, do you like this kind of movie as much as I do? If so, what's your fav in this genre? If not, tell me why, please :).