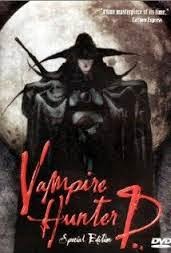 Title: Vampire Hunter D (1985)
Rating: 15
Summary: In the far future the world is ruled by vampires and mutants. When a young girl is bitten by a vampire lord she seeks the help of a mysterious vampire hunter called D.

This is one of the first anime I ever saw along with Akira and Urotsukidōji - Legen of the Overfiend. It is the one I liked best and hence have sitting on my DVD shelf.

The vampires in this are very definitely not your sparkly Twilight kind; they are ruthless killers and look on humans as playthings. They are the nobles to the human peasants and they act like it.

I like D, he's very stoic and straight forward in his approach and his hand tries to give him angst, but he's having none of it. He has honour and lives by it even when those around him are underhand.

There are so many tropes in this film that listing them would take too long, but the whole package is very entertaining. It's very anime and the characters all fit into their expected slots, but it's fun and has some great detail and action sequences. This isn't a film that is going to shock you with plot twists or unexpected character development, however, it is well worth watching. 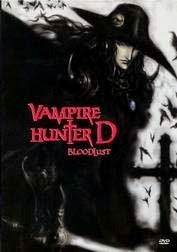 Title: Vampire Hunter D - Bloodlust (2000)
Rating: (18)
Summary: When the daughter of a rich man is kidnapped by a vampire count, D is hired to bring her back or destroy her if she has become a vampire. However, he has not been hired alone and is up against another set of bounty hunters who are as likely to kill him as the vampires.

I really enjoy this film as well and the first thing to say about it is how much better the animation is than the first. The first is good, but you can see how the technology has advanced between one and the other.

The evolution of the female character is also very obvious from the first film to the second. In the first we have a strong girl, but she immediately lets D do all the dangerous things and falls in love with him for no other reason than he is tall, dark and mysterious. In Bloodlust we do have a kidnapped girl as part of the plot, but one of the other bounty hunters is female and is actually the second lead as far as the 'good guys' go (where good guys is a used very loosely). She has a part other than to simply prop up D, which is nice to see.

This one is more exciting and has more of a twisty plot. It's deeper than the first and asks question about more than just the immediate action. The side characters are also better fleshed out.

There are tropes again, but it definitely isn't such a straight line from A to B.

If you like animated films for an adult audience, this is definitely one for you.


Between the two films I like both of them for different reasons. The first one is definitely, these are the good guys and these are the bad guys and now they are going to fight, but sometimes that's what you want in a plot. The second has a few more grey areas, but it's still D is the good guy, therefore D will triumph. I really love both of them.


Master list of Reviews of the Vampire Film I Own
Posted by Tasha Duncan-Drake at 08:34