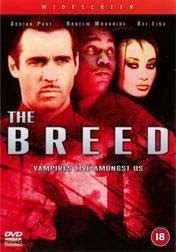 Title: The Breed (2001)
Rating: 18
Cast:
Adrian Paul ... Aaron Gray
Bokeem Woodbine ... Stephen Grant
Bai Ling ... Lucy Westenra
Péter Halász ... Cross
Summary: In the near future vampires (the breed) have revealed themselves to humans, although the totalitarian government keeps most of humanity still ignorant of their presence. When his partner is killed by a vampire, cop Stephen Grant is teamed up with one of the breed, to track down the rogue. Stephen must overcome culture shock and all those pitted against him to bring the murderer to justice.

One thing I really like about The Breed is that the cast is racially diverse. Yay for the casting agent.

The second thing I really like is the plot. It's interesting and different and while I found it utterly obvious as to what was really going on, I don't think everyone would. The fact that I was only mostly sure was a good sign :).

I'm not sure why the setting was a totalitarian state of the near future, but it was an interesting choice. The look of the whole film is very utilitarian and stark. It definitely gave atmosphere and an added layer to the whole thing. It didn't interest me that much, but I am sure it would bring levels to the film for viewers who enjoy that genre.

The only thing I would say is that the character of Stephen Grant doesn't really go with the setting. He seems more like a regular cop from a New York based show rather than a cog in a world government. However, that doesn't detract from the fact he is a great character and well worth watching.

Not going to lie, I originally watched this film because of Adrian Paul. I am a big Highlander fan so for a while there, if he was in it, I picked it up to watch. I think he does very well as the Jewish, Polish vampire Aaron. There is one scene towards the end, which I can't describe in detail because it would be a spoiler, but he's absolutely brilliant.

The lead female character, Lucy, is also interesting. She is quirky and independent and has depth, which is always a good sign. She is also very necessary to the plot. There are no other major female characters, so not so good, but you can't have everything I suppose.

Yes this film has lots of clichés (someone does mention Nazis for a start) and at times there's some over acting and a good number of character names are straight out of Dracula, but it has so many good points to make up for it. The vampire lore is interesting, the plot has twists, the characters have depth and it's decently put together. It's obviously not a high budget blockbuster, but neither is it a low budget disaster. The effects are good, I like the look of the vampires, but nothing is spectacular. What is good is that I think lack of huge budget did make them think about the script. Some of the dialogue is superb.

For vampire lovers, this is a movie well worth checking out.


On the fanfic side of things it makes me want to write ménage :).


Master list of Reviews of the Vampire Film I Own

Have you seen The Breed? Did you like it? Have you seen any other vampire films set in a totalitarian state of the future?
Posted by Tasha Duncan-Drake at 11:46