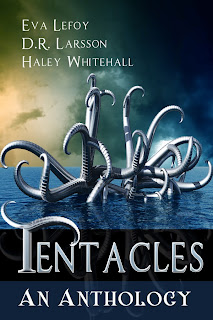 Vampires and werewolves are the hot thing in romance right now. Even the bear shifters are gaining ground. It seems everyone wants a lover that goes bump in the night and has razor sharp teeth. Monsters are all the sudden becoming, it seems. I have my own opinions on why that is, but I won’t get into a political-pyscho-social discussion here.

But I can talk about monsters.

There are monsters from the romance world and then there are monsters with more of a sci-fi/horror feel to them. They too, can have sex though. Hey, everything needs a way to procreate! So when I write say a tentacle monster, a little bit of romance/relationship stuff sometimes sneaks in. Take the Tentacles anthology. (http://amzn.to/18eOwiU)

The story Zaural has a sexy and capable female captain sent to a far-flung dustbowl of a planet to rescue colonists prior to a particle shower ravaging the planet. She runs into trouble with the native species and her ex-lover, and it isn’t long before she’s in over her head:


Thousands of arms. Stings as sharp as blunt needles. Pain seeped into every pore.

Half-conscious she struggled, fighting with the creatures and with her partially numbed limbs. Some part of her mind told her the stings were to be expected, but adrenaline spiked anyway. Her limbs thrashed awkwardly, desperate for traction. Kicking, twisting against the tentacles, she opened her mouth to scream.

A second later her body went rigid. One sting too many? Was this what it felt like to be dead?

And then she knew.


Monsters have their way with you and you either roll with it and change, or you don’t. In this case, Zaural resists until the very last minute, when there is no other choice for her if she wants to live. Luckily, her ex helps her adjust… heh.


Startled, out of air, she struggled toward the surface. Hurry, her lungs cried. Hurry. She kicked harder, using her arms. An immense cloud – no, a Gramica – blocked her way, just before she broke the surface. Her lungs burned fire as she turned to swim around it to the next nearest hole. Her legs aching, her lungs screaming, she could not outmaneuver the tentacles. They wrapped around her and drew her in. Holding her back flat against the Gramica’s belly, but not stinging her.

Then Kas’s face was before her. And his lips touched hers. His mind was saying something, over and over, that sounded like … breathe. She twisted desperately, but a gang of tentacles clambered over her skin, holding her down. Until she was spent. Until there was nowhere left she could move. And then something entered her.

She gasped into Kas’s mouth and sucked in … air. Precious air.

His lips laughed against hers as stars shot through her eyes. An incessant hum surrounded her, growing louder. Louder. It permeated everything. Every pore in her body. Every where. Every … Even there. Oh God, there.

She let go and screamed into Kas’s mouth as the most intense orgasm she’d ever experienced vibrated through her. It pounded her body like a tsunami, bearing hundreds of quivers and shakes in its wake.

He held her steady through it all, still spearing her mouth with his tongue. Still laughing.

But the anthology also offers straight horror, where alien-like monster infestations invade your body and you probably aren’t going to live. It’s also got an underwater tentacle creature – a Kraken! – and a slithery white tentacle alien who’d like to help us retain our memories.

Sorry! Had a Blade Runner moment there!

But I hope you check out Tentacles (http://amzn.to/18eOwiU) and shiver from one type of story to another, and along the way, come to think of monsters as highly entertaining!

About the author: Eva Lefoy writes and reads all kinds of romance, and is a certified Trekkie. She’s also terribly addicted to chocolate, tea, and hiking. One of these days, she’ll figure out the meaning of life, quit her job, and go travel the galaxy. Until then, she’s writing down all her dirty thoughts for the sake of future explorers.
Links for Eva:
Facebook | Twitter | Goodreads | Amazon Author's Page | Blog
Posted by Tasha Duncan-Drake at 00:01