Q is for Q - Blogging from A to Z April Challenge

Q, the man without whom 007 would have been toast many times over. I always loved Q as a character; the way he always scolded Bond as if Bond was a mere boy. He was so good at it and Bond just took it because he knew that Q had a better brain on him than all of the 00s combined. Desmond Llewelyn was a master as Q and if he was still alive there could be no other, however, I do have to admit to being a little more fond of Q in a much more shallow ways since Skyfall.

Can you honestly blame me?

I have a thing for the geeky characters in shows, I always have. For example my favourite character from Seaquest DSV was Tim O'Neill, played by Ted Rami (Sam's little brother). Spock was always much more interesting to me than Kirk in Star Trek and so on and so forth.

If there was a slightly geeky guy with glasses as part of the support team in an 80s TV show, that was who I liked best. You can imagine my joy when Daniel Jackson was actually one of the stars of Stargate :).

Anyway, back to Q. Ben Whishaw as Q gives James Bond movies something I have always wanted, a fanciable geek. You have to admit he's rather pretty: 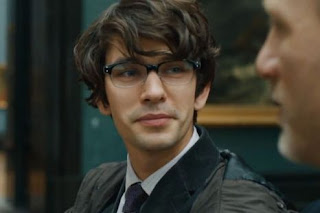 The fact that he sasses Bond on their very first encounter also gains many many browny points with me. Those glasses, that cardie, that hair, what's not to love? The fact that he is highly intelligent just makes it win/win.

Spolier in the next bit, so highlight to read :).

Of course there is the moment of abject stupidity in the film where he connects a foreign computer from a known hacker to his own system - what moron would do that? - but I suppose we have to forgive the writers their little slip ups.

I suspect that this new young Q is a direct play to the fandom. In recent years TPTB seem to have woken up and noticed that slash fandom = longeivity and contains many people with cash they will spend on DVDs and memorabilia. I'm not saying this is the only way into such things, but many films and TV shows do seem to be lining up cute men to be paired together if we want to.

I thoroughly approve, but would also like to see a canon gay or lesbian pairing in a big blockbuster as well, thank you.

The original Q was wonderful, the new Q is fabulous and John Cleese wasn't bad, so more power to Q, I say. 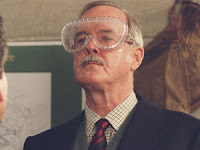