B is for Bard - Blogging from A to Z April Challenge

I remember being read to in primary school, but the first literature I remember studying was in senior school and it was Shakespeare. I have loved the Bard ever since.

I am definitely not a Shakespeare scholar. I don't know everything there is to know and I never will, but I do know that I enjoy a good production of his work in a way that some modern plays don't touch me. 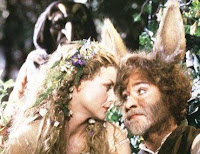 The first play we ever studied in English lessons was A Midsummer Night's Dream and I clearly remember loving the play within a play. It probably helped that our drama group did the play within a play for a drama competition as well and I was praised for my portrayal of Moonshine :). I'm not going to say what they said about the rest of it.

At school I also studied The Merchant of Venice and Macbeth, both of which I also adore. I have to say it was a production of The Merchant of Venice where Antonio was openly gay for Bassanio that opened my eyes to alternative interpretations of various texts. My English teacher never mentioned that possibility during lessons, funnily enough, they were just very good friends. 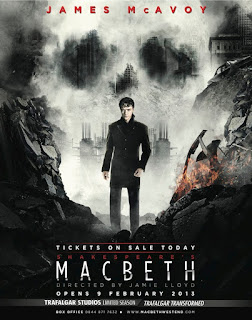 My favourite of the three, however, has to be Macbeth. Ghosts, murder, intrigue ... what's not to love? I saw this once in the Barbican where they had a totally black stage with virtually no props and it was magnificent. Last month I also saw the production with James McAvoy in London and it was utterly, utterly amazing. If you would like to see my full review then you can find it at James McAvoy as Macbeth is Bloody Brilliant also on this blog. Wait for J and I'll tell you just how much I love James McAvoy, with lots of pictures :).

David Tennent as Hamlet was superb; saw that on his first performance back after he hurt his back. I also really enjoyed the TV version. Probably a sign that I enjoyed the murder, ghosts and intrigue again, right? ;)

I also loved the BBCs productions of Richard II with Ben Whishaw (left) (more about him for Q), Henry IV with Jeremy Irons and Tom Hiddleston (right) (lots about him for T later) and Henry V. I just wish they had released them in HD rather than just on DVD. These versions were done so well in the way the language was simply treated like English. It meant that even if the words were a little odd at times, the meaning came through anyway. Absolutely brilliant.

I have seen a couple of productions I haven't liked, however. I saw a version of Much Ado at a local event that was yawn worthy and I have to say I was not impressed with The Tempest when I saw it in Stratford even though it had Patrick Stewart in it. I found it totally dull, which, given there are shipwrecks, magic and mayhem in it, should not have been so.

Then there was the version of Macbeth with Sean Bean. Sean was superb, but the director should have been shot! I actually missed the murder of Banquo along with significant parts of the rest of the play.

Shakespeare has it all: humour, drama, murder, magic, witches, ghosts, tension, love, romance, madness ... I could go on. A good production can make you laugh, cry and jump, sometimes all at the same time. Don't be afraid of the language; just enjoy it.


So lovely visitors, what is your favourite Shakespeare play?