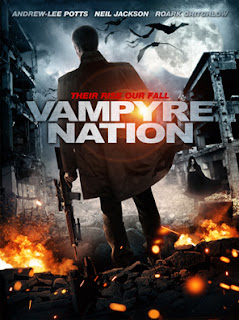 Summary: Vampires have come out of the shadows in Romania where a synthetic blood substitute allows humans and vampires to co-exist. However, it's not really working too well. The are blood dealers and vampires willing to buy the blood they sell, only not all vampires can be bothered to pay. The thing is there is something else on the streets now, something far more dangerous than the average pissed off vampire. Hence a cop with a crew of (ex)vampire hunters he pulls out of prison for the job go in to vampire territory to find out what is going on. Everything is not sweetness and light.

First of all, let me point out that I am a huge vampire movie fan and a fan of Andrew Lee Potts as well, so this film had a lot going for it as far as I was concerned before I even watched it. Then it managed to push several of my buttons without even trying, so, yes, I enjoyed it a lot.

However, let's be honest, it's not Shakespeare.

What's good: most of the acting, the main characters, the general plot, the vampires, most of the special effects.

So, yes, very wide groupings there.

The Effects
This is not a high budget blockbuster, it doesn't have the magnificent sets and amazing CGI of Underworld or Twilight, however, it does really well with what it has. The main giant bat like vampire is well done, some of his giant bat like friends are somewhat generic, but it's a damn sight better than more of the SyFy/Asylum movies I have seen in recent years :). The normal vampire special effects, however, are cool.

The Plot
It mostly holds together, in fact it's well thought out, but there are little bits that just don't make sense. I never did quite figure out about the whole vampires being corralled into one area thing they had going on. It didn't really gel, as if it had been tagged on, so the background history of the whole thing was a little dicey. However, the main plot held up rather well.

The one thing I did think though, it drew heavily on Blade II. Very similar plot line in places. There was different background and eventual outcome, but the beginning definitely had me thinking of Blade II, even so far as they had a Blood Pack of three.

The Acting
All of the main cast held their own. There weren't any of those moments when a plank of wood would have been more interesting to watch than the actors on screen. I have a big soft spot for Andrew Lee Potts, but there was just one thing - I never did figure out what his accent was supposed to be :). What was not so great were some of the background characters; they were less than dynamic. However, usually they didn't actually have to do much except die, so there wasn't a huge problem.

The Characters
Well written, rounded characters for all the main ones. There were some clichés thrown in, but not too badly. I liked the people I was supposed to like, engaged with them, spotted the bad guy the moment he stepped onto the screen (but that happens most of the time anyway) and simply enjoyed their interactions. ALP was good as Johnny Harker because he's a bit of a dickhead, but also on to something. Neil Jackson as Derricks was the sympathetic character, tragic background story and all, but he pulled it off really well. At first I thought the girls might just be window dressing, but both Heida Reed and Claudia Bassols had decent parts to play which was great. Then there was Ben Lambert as the main vampire character and can I just say, yum, and on a less shallow note, he turned out to have some depth.

By the end I very much wanted to see more of these characters and their world, which is what says it all for me. No matter what it may have fallen down on during the film, I wanted to write fanfic about these characters when it was finished. That tells me it got into my head. Hence I class this as a good film.
Posted by Tasha Duncan-Drake at 12:48