The Woman in Black - Dan Radcliffe

First of all, let me say, wow, this was a scary film. It is full of the psychological horror, camera tricks and fantastic set up that I love in a horror movie. It is a ghost story of the best kind. No need for gore or over done CGI every five seconds, just good, honest scares, perfectly timed with just the right amount of special effects. This is the kind of movie where you go home, close all the curtains and then huddle under the duvet refusing to look at that dark corner of the bedroom, that before now has never been overly threatening.

The general story is about Arthur Kipps, a young lawyer who is sent from London to a remote village in the north of England to collect and collate the papers of an old lady, Alice Drablow, who has just died. The villagers are hostile and try to send him away, but no one actually tells him that it's because there is a vengeful ghost at the old lady's house and going anywhere near it is a very bad idea. It would be a very short film if they had. 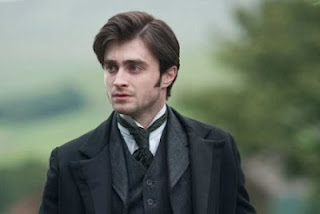 Let's start with Dan Radcliffe as Arthur Kipps, a widower with a young son of four years old whose wife died in child birth. When Dan first appeared on the screen I had the problem lots of people probably had, all I could see was Harry Potter and the stream train really didn't help. However, as soon as the setting reached the small village where most of the film takes place, that all changed. He became Arthur Kipps and all thoughts of Harry vanished from my mind. His performance is moving, showing us a young man who is slightly broken from the death of his wife, but who cares for his son very deeply.

He carries the entire film with much of it just him and shadows. Dan is a superb actor and, okay, now for the shallow moment, he's also very attractive in the period costume, especially when he's somewhat mussed. 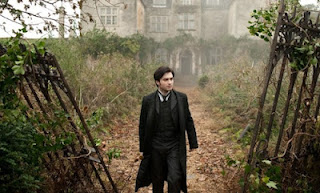 Now to the setting, what could be more desolate than an island, a la St Michael's Mount, linked to the mainland by a causeway that is underwater for a large amount of the day and surrounded by deadly marsh? In this Hammer production they also manage to make the village where some of the action takes place just as desolate. It is a cut off, lost place with people so scared they hide their children. The whole film is beautifully shot with desolate landscapes and sea mist and the half falling down house with its overgrown and wild grounds. The scenery sets the mood and the rest of the film does not disappoint.

The atmosphere is only increased by the clever direction and cinematography that make up the film. It is not done with in your face confrontations or blood splatter or gruesome monsters, it's done with clever camera shots and momentary glimpses that had me scanning the background of every shot as well as looking at the foreground action. These little moments made the times when the woman in black was finally right there even more shocking and scary.

At first glance the two shots to the right look perfectly innocent, but then you look closer and the icy fingers of fear touch your spine. This is how the entire film is put together.

The cinema was not full of screams, it was full of genuine out cries of shock and then that nervous laughter that follows when people realise they're terrified, but still breathing. At one point I believe the entire cinema jumped out of their seats at the same time.

This film is brilliant and it is going on my wishlist for the moment it comes out on blu-ray. If Hammer can produce more films like this in the future I will once again become a devotee.
Posted by Tasha Duncan-Drake at 11:21