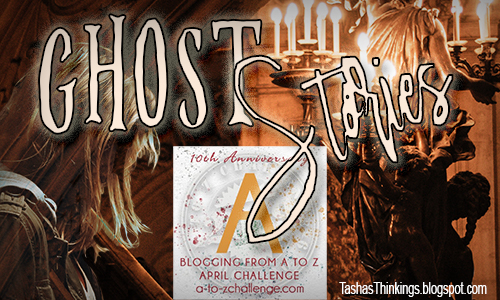 A is for The Abbott's Fireside

Greetings and welcome to the #AtoZChallenge for 2019 on Tasha's Thinkings. My theme this year is Ghost Stories. Every day I will be writing a flash fic ghost story inspired by local hauntings from my area of Kent, UK. I'm also posting dramatic readings of the stories to my Patreon (some publicly, some for patrons) so see the end for details.

For those not in the know, the AtoZChallenge happens every April and this year is it's 10th anniversary. Bloggers from all over the world post everyday using the letter of the alphabet for that day as a prompt (e.g. A on the 1st, B on the 2nd etc), except for Sundays - hence 26 days. Some of us also have a theme.

Today I thought I'd break you in gently, so we start with a humorous rather than terrifying tale.

It is inspired by the haunting at The Abbott's Fireside Pub-Restaurant, Elham - they are said to have two resident spooks, a man with a sword and a Cistercian monk.

Molly wasn't sure who was most shocked, her or the semi-transparent man waving a sword at his reflection in the full-length mirror beside the door. He looked like he had seen a ghost, which was hilarious considering that he seemed to be the genuine article.

Fear warred with amusement as the two emotions clashed in her brain. Not a totally new experience for Molly.

"Um, hi," she said, since the man hadn't just upped and vanished.

Of course she'd heard about the ghosts, everyone working at the restaurant did, but she'd not given it a second thought. Every English pub had a ghost story or two to impress the punters and there'd been no signs these ones were real. Molly had only been working there for a couple of weeks. She'd lucked out when the previous lunchtime supervisor had gone on maternity leave just as she moved in with her aunt for a break from trying her hardest to be an actress in London. With her line of work, Molly had a lot of experience in the hospitality sector, the realm of many yet-to-make-it actors.

"You are not afraid?" the spectre said, sounding utterly perplexed.

"Well, to be honest," Molly replied, "I am a little, but you looked more startled than me, so I didn't want to make it any worse."

The ghost lifted both eyebrows.

"I'm Molly," Molly decided she couldn't just leave it at that.

For a second, she was pretty sure the ghost had no idea how to respond to that.

"Robert," he finally replied. "Pleased to make your acquaintance."

Molly smiled. This ghost didn't seem so bad, not like some she had come across.

"Nice to meet you too. Were you practicing your fencing just now? Sorry to have interrupted."

"If only I could," Robert said mournfully, "but, alas, I have no sparing partners."

"The monk not into that sort of thing?" Molly asked.

The other rumoured ghost was a fully robed monk. She figured if one was real, both probably were. To her amusement, Robert rolled his eyes.

"The pious brother would never lower himself to such earthly matters," was the scathing response.

It did not sound as if the two spirits were friends.

"That's a shame," Molly sympathised. "Well, I don't know how to fence, and I guess it wouldn't work too well with us being on different planes of existence, but I'm happy to chat while I get ready for opening."

"Don't see why not," Molly said, doing her best to ignore how the chill in the air grew at Robert's excitement.

"Miss Molly," Robert said, "you are a breath of fresh air."

A small part of her was curled up, clutching its legs, rocking and gibbering, but she was doing her very best to shush it. She couldn't really help the instinctive reaction, it was just the way things worked between the living and the dead, but Robert seemed nice.

"So," she said as she walked to the small bar to start setting up, "how come you're stuck here."

"Ah, my story is a sad one," Robert said, following her.

It made all the hairs on the back of her arms stand up as he did, so she tried to ignore that as well.

"I killed a man in a duel inside this establishment," Robert said, sitting himself down on a barstool as Molly went about her business. "It was a fair fight, but, to my detriment, my opponent turned out to be the son of the local squire. On his urging a mob of locals assaulted me, strung a noose out of an upstairs window and stretched my neck for me in a most unpleasant manner."

"Alas, fair lady, little in this world is fair."

Molly couldn't really argue with that, so she changed the subject. As it turned out, Robert was something of a fan of reality TV, having taken to watching it unobserved when guests or other residents of the pub-restaurant had it on. It seemed Robert had distinct opinions on the current results of the Great British Sewing Bee. Molly just nodded along.

Robert was saying something about pleats while Molly sorted menus when the door to the back opened again and Paul, one of the servers walked in. He took one look at Robert, screamed and ran right back out again.

"Well that was rude," Molly said.

"But not unusual," Robert replied.

It was only when Molly looked at him properly that she realised his face looked funny; where his eyes should have been were only dark holes. It was a little freaky, but when you'd been discussing the perfectly concealed zip with someone, it was hard to be afraid of them.

"Um, is that normal?" she waved her hand in the general direction of Robert's face.

"They've gone haven't they," he said with a sigh. "Sorry, it is an instinctive response to fear."

He shimmered from head to foot for a moment and his eyes came back.

"We spirits have to keep up a certain reputation," Robert said. "It wouldn't do to let the side down. Well, I should let you get on."

He began to fade out almost immediately.

"See you around," Molly said, giving him a wave. "I'll claim all I felt was a cold spot, that'll keep your mystique intact."

"You are a true friend, Miss Molly," Robert said as he completely disappeared.

Molly smiled to herself.  Nana Doris would be so proud of her, she always said ghosts needed friends too.

For this month I am also recording dramatic readings of all the ghost stories. These are available on my Patreon. Some are public, some are patrons only. This one is public, so do stop by to listen.
Apparition - read by Natasha Duncan-Drake

Please do let me know what you think of the story and leave me links to your AtoZ entries so I can visit you back. I love to chat.
P.S. I am really busy until the 3rd, but promise to visit back as soon as I can.
Posted by Tasha Duncan-Drake at 00:30