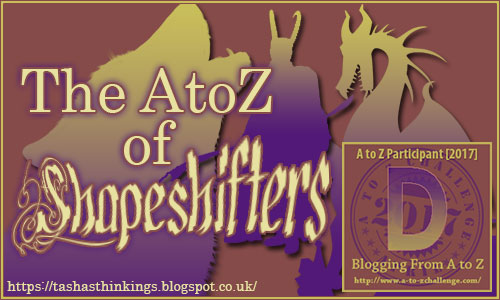 Welcome to Day 4 of the AtoZChallenge and the letter D. Every day in April (except Sundays) I will be making a post about shapeshifters of all kinds. Check back to see my choices and, from time to time some flash fiction too. 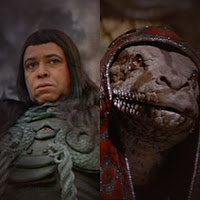 Okay, I admit it, I'm back to Conan, but this time Conan the Barbarian, and how could I not mention Thulsa Doom, as played by the great James Earl Jones.

Thulsa Doom is basically responsible for creating Conan. By massacring Conan's people, the Cimmerians, when Conan was a child, and sending him to the Wheel of Pain to be a slave, Doom set Conan on the path that made him the great warrior he became.

When we first meet him, Doom is a raiding wardlord with his eyes on world domination. When we meet him again after Conan is grown, he is a charismatic cult leader who demands total loyalty from his followers until death.

His cult is that of the snake and Thulsa Doom has the ultimate power to turn himself into a huge serpent. Of course he never expected Conan to come looking for revenge.

I bring you a classic werewolf today, the lord and sire of his kind. Draugluin is a werewolf created by J.R.R. Tolkein in his epic, the Silmarillion. Draugluin means blue wolf in Sindarin, and unlike the werewolves of other universes, the werewolves of middle earth do not transform into men, they are always wolves, but they have the intelligence of mortal men.

Draugluin was created by Sauron himself with the aid of Morgoth. Bred from the wolves of the first age he was inhabited with an evil spirit and became an abomination. He is the sire to all werewolves, which may also have mutated into the wargs of the third age.

He lived in Tol-in-Gaurhoth with Sauron, his master, and was killed by Huan during the Quest for the Silmaril. He was the greatest of all werewolves.

Thank you for visiting.
I hope you drop by again. Happy AtoZing.