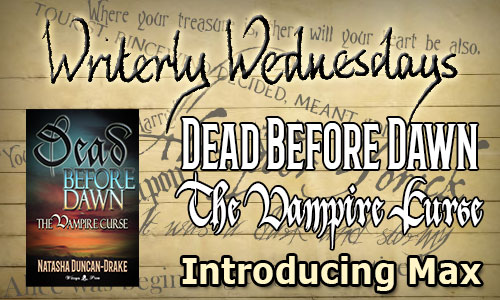 Welcome to my blog for another Writerly Wednesday. I've just launched a new free novel on Wattpad called "Dead Before Dawn: The Vampire Curse", so today I thought I'd introduce you to my leading man, Max. I hope you like him.

So Max in an actor who has worked his way up to the edges of the A list. I know, another main character who is an actor, I seem to like grabbing them out of their life and then throwing them at things they can't possibly understand :). We writers are evil like that.

Max is the go to guy for playing the nerd who turns out to be a secret ninja.

He's about 5'10''/5'11'', depending on who you ask, with the wiry athletic look going for him. Think something along the lines of James McAvoy's build in Wanted, just a little bit taller. Put him in a t-shirt, jeans and glasses and he can look like a geek, put him in black spandex and he's an assassin. 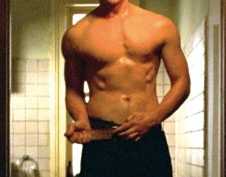 When he was a teenager he was a very promising gymnast looking at national and international level competitions. He took up the sport because he had some anger management issues after his father abandoned the family. The discipline required gave him something to focus on.

Unfortunately a bus crash all but destroyed one of his knees. He wasn't given much chance of walking normally again by the specialists, let alone competing. Being a stubborn ass he proved them wrong, but he could never quite get back to the level he had been at.

Through all this his twin sister Cal was his rock. She has always been the level headed one. Everyone thought she would be an engineer or a doctor, but she ended up a fashion photographer, which she claims is all about math and angles, so it's the same thing.

When Max's gymnastics career proved to be over, Cal got him into modelling. From there he decided to try his hand at acting and, as it turned out, he was good at it. From bit parts on the New York theatre scene he moved into films very quickly thanks to his agent Terisa. He causes directors heart failure because he likes to do his own stunts, but he has a reputation for being easy to work with.

He has a special relationship with director Darius Vandenborre, along the lines of Depp and Burton. Darius is something of a mentor to Max. Their latest film together is "In From the Cold 2: Rogue Agent", which is the premier in Moscow where all the trouble starts.

Max does his best to keep his private life private. He's gay, but not publicly out.

He has a huge crush on his male co-star from Rogue Agent, Gian Bossard. He hasn't acted on it because he doesn't want to wreck their friendship. Gian is Swiss, from the French speaking region, 'built like a god', openly bi, and his accent makes Max's knees go weak.

Max's life is going just about perfectly until he is attacked by a creature from legend on the back streets of Moscow. Infected by the vampire's bite he's likely be dead before dawn. 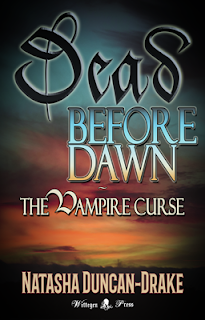 Dead Before Dawn: The Vampire Curse
by Natasha Duncan-Drake

Max Statton is in Moscow for the premier of his new movie when a terrifying encounter turns his life on its head. Attacked by one of the city's resident vampires, Max is bitten and infected. Only a team of local vampire hunters prevent him being dragged into the underworld of the undead.

Fighting for his very existence, Max must resist the vampire curse with the help of Yulia, the hunter's doctor. But with his humanity slipping away, Max only has two choices: ask the hunters to end it, or risk becoming a monster. His fame makes it dangerous to just kill him, but there may be no choice.

When Yulia offers him a kill or cure option, Max must decide if he has the courage to take it. He wants to go home, he wants to see his family and friends, but his life is poised on a knife edge.


Being serialised on Wattpad with new chapters every Tuesday and Friday.
Posted by Tasha Duncan-Drake at 08:04