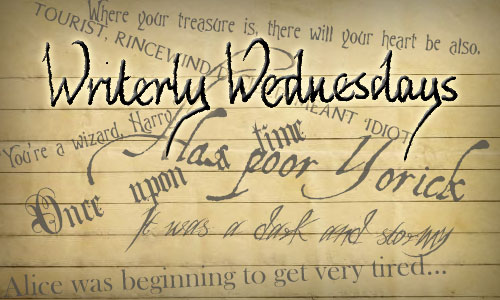 Welcome to my blog for Writerly Wednesdays 31. This week I have a piece of flash fiction for you, which I hope you will enjoy. It's on the dark fantasy side. Many thanks for visiting.


They say the pen is mightier than the sword. In my case I am absolutely sure of it.

I inherited this particular pen from my grandmother.

To look at it's nothing special. It is made of black ebonite with gold metal work, some of which is showing its age. This is a pen which has been used, not kept in a drawer and occasionally taken out and admired.

Not surprising really, when you understand what it can do.

This pen does not write in ink. It writes in blood, the owner's blood to be precise.

I am aware that blood should not be a medium much suited to the workings of a fountain pen, but then this is no ordinary example of its kind. Each time it is used it must be refilled, and each time it will keep writing until its purpose is finished, but no more. It never needs cleaning and it is one hundred percent reliable.

I know you are wondering what could entice anyone to fill a pen with their own blood, and I will tell you, but I think a little background is in order first.

My family is an ancient one. We can trace our ancestry back to well before the Roman period. This is mostly because we have kept it ourselves. There exist tomes full of our family tree, now housed in a very secure bank vault. We almost lost it all during the Second World War, it was a very close thing, so extra precautions have been taken since then.

The pen has been in my family since the first record was made.

You are going to say, but there was no such thing as a fountain pen back then. You would be right of course. It has only been a pen since approximately 1850, before that it was the most beautiful quill and inkwell. Well, at least that is what one of my ancestors who chose to paint it would have us believe. I have seen the painting once; it is most captivating.

It may even have been something else before it was a quill, but that information is lost.

I remember when my grandmother handed me the pen as she lay dying. She smiled in a way I had never seen her smile before. Her whole body relaxed and she closed her eyes, still smiling. For a moment I thought she might float away, or simply disappear; it was that striking a change. Of course she simply slipped away, her last breathe leaving her body as a small sigh.

The burden did not feel particularly heavy then. I knew it was an important one, but I did not understand the true weight of it at that moment. It has been ten years and now I comprehend the smile very clearly.

My family are guardians of the future. We make sure humankind continues. You would not believe how many times we, as a species, have come close to extinction. Modern humans are conceited in their belief that only current science has the power to wipe out humanity. There have been many near misses before.

The pen can change reality.

It cannot change the past, but it can order the future.

It can make a person say or do something they never would have done on their own.

It can topple governments.

It can raise up a messiah.

It can do just about anything.

All I have to do is fill the reservoir and write the new truth. It can be a few words, or pages of a story that the universe will then play out.

Now you want to know why then have my family allowed so much suffering, why do we allow injustice in the world?

It is simple and there are two reasons: we are not omnipotent, merely observant; with each action there is a price.

When the universe changes, people often die. It does not matter what it done, if something is different at a key moment, it has consequences. You know the saying about a butterfly flapping its wings over the Himalayas causing a hurricane thousands of miles away; my family understood this long before Edward Lorenz ever made it famous.

To make sure we take our responsibility seriously there are ghosts.

That is why my grandmother looked so at peace: she was finally free; she no longer had to look at what she had done.

I see them all. Every life I have caused to cease to be. They visit me.

The worst are the deliberate ones; the evil that was just too dangerous to allow to continue. They seem to know it was me that ended them, at least at first. They always try to take revenge. It is impossible for them to hurt me, but that does not stop them trying.

Eventually, when they run out of rage, they become grey reminders, like the others, but they can be troublesome for a while.

Sometimes I wish I was totally unaware. Sometimes I wonder what it would be like to take up the pen and write of my own death.

My successor is only three, so death is merely a pipe dream. So young and yet already chosen, already marked, just as I was.

Why do we continue to shoulder this burden, you want to know.

Once, long ago, my family was granted a vision of the destructive nature of human kind. It is a vision passed down along with the pen. We know what will happen if we abandon our role, we have seen it. We have also seen the wonder that humanity will become if just given the chance.

I am still seeking writers and book people of all kinds to feature on Writerly Wednesdays. If you are a blogger, comic creator, cover artist, author or anything else to do with writerly things I would love to host you.

See this blog post for details.
Posted by Tasha Duncan-Drake at 00:00