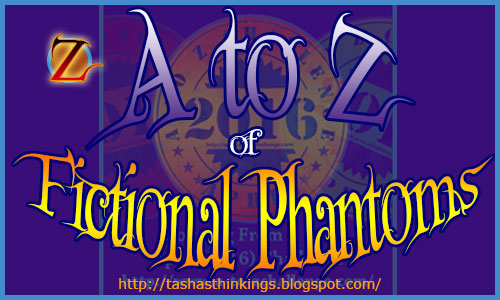 We've finally made it, the last day of the AtoZChallenge and the letter Z, which is always a little troublesome. For Fictional Phantoms today I have a chap who is more demonic than ghostly in the incarnation I have chosen, but he had to die to get that way, so I think he counts.

Zhong Kui is a traditional folklore hero in Chinese mythology. He was made king of ghosts by the Hell King after he committed suicide.

However, in the version I have chosen Snow Girl and the Dark Crystal, he's a little more demonic for other reasons.

With the once in a thousand year full moon on July 15th approaching, when beings may cross through the realms and reincarnate to a higher plane, tension is brewing in the town of Hu.

Zhang Daoxian, tasked by Heaven to prepare the town to stop it being taken by demons, has resurrected Zhong Kui. Meant to be a scholar he was framed and stripped of his qualifications and committed suicide, but Zhang Daoxian brought him back to be a demon slayer.

Zhong Kui then slipped into hell to steal the Dark Crystal, the most powerful object in the three realms thanks to demons stealing the spirits from humans to charge it.

Using heavenly objects Zhong Kui attains a demons form so that he is able to beat any demons who come his way, secure in the knowledge that he is doing what if ordained by Heaven.

Problems arise when he meets a demon he knew once before, a beautiful snow demon, whom he fell in love with three years earlier. He also starts to find out that his mission may not be as heavenly ordained as he thought.

So you've made it to the end of the AtoZChallenge, do you have any recommendations for sites that are a must see?