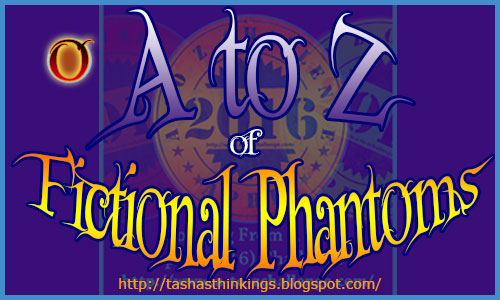 Have we really already reached O? Welcome once again to my blog and Fictional Phantoms as we make our way through the alphabet. Today's ghost isn't that scary unless you like to wear black a lot and have a need to rule the galaxy.

[Edit: apologies to all expecting visits back from me for today and Sat - I will get to them, but I've not been feeling well today. A headache has made concentrated screen work rather difficult. I will get back to you as soon as I can. Promise.] 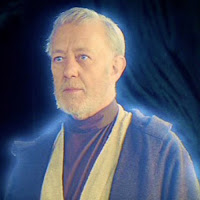 I admit it, when Obi-wan died in Star Wars, I was shocked and devastated as a child. Even though I actually saw Empire before I ever saw Star Wars.

I was only eight when I first saw Empire (my parents had no idea is was a sequel when they took us to see it) and I may have failed to comprehend some of the details. Tauntauns and flying lightsabers I got, force ghosts I kind of didn't understand.

Obi-Wan Kenobi, the Jedi knight and mentor of Luke Skywalker is awesome. Yes he made some mistakes along the way, but I think we can agree, the Jedi order was mostly the cause of those.

I love the fact that Obi-Wan just pops up every now and then through the original trilogy and imparts advice that he knows is going to be ignored. I can imagine him standing there watching everything while invisible, rolling his eyes.

The fact he glows and is slightly see through, I always thought was terrible awesome.

"If you strike me down, I shall become more powerful than you can possible imagine."

That quote always makes me wonder if the force ghosts aren't running around in the background fixing things without anyone knowing about it. Kind of a supernatural police force. I mean if Jedi become so all powerful when they die, what about Sith lords and other Dark Siders? Not all of them are going to have been redeemed like Vader. Someone has to be keeping them in check.

For some reason I now have the most absurd mental image of Yoda and The Emperor playing ping pong to see who gets to go and bother the living next. Nope, I can't explain my brain either :).

Do you think we'll get Ewan McGregor showing up as a glowy ghost in the new films at any point?