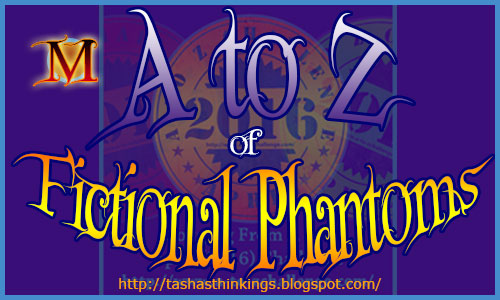 We are half way through the month and it is time for the letter M. Today I welcome you to join me as I talk about three ghosts, only two of them are related, so they are in the same section. Their connection is that they are all ghosts that originally scare small boys, but in the end help them. 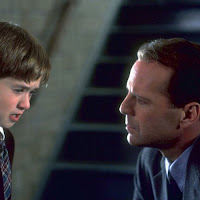 My first ghost is from the awesome film The Sixth Sense. Now I know everyone knows the twist in this film now, but when I saw it in the cinema, I didn't get it until the end. For me, that's saying something: I can usually spot the twist before the titles have finished (okay, maybe not that fast :)).

Dr Malcolm Crowe (Bruce Willis) is a child psychologist from Philadelphia who wants to help Cole Sear (Haley Joel Osment), a nine year old who seems to have severe psychological problems. Cole's symptoms appear to be similar to a young man Crowe tried to help before, and failed.

Cole sees ghosts, only Crowe doesn't believe him at first. Only later, as he learns more does he finally come to believe and it is only after that, when he has helped Cole confront his demons that he realises what is going on.

Cole told him that ghosts sometimes don't know they're dead, but Crowe never realised he was one of them. The gun shot wound he thought he survived was fatal.


Anne and Melissa Anne Montgomery (The Lady in White)

The Lady in White is a local legend in Willowpoint Falls, where the ghost of a distraught woman roams the cliffs at night, searching for something she cannot find.

Frankie Scarlatti (Lukas Haas) is nine in 1962 when some school mates lock him in the cloak room, leaving him there for Halloween night. He sees the ghost of a girl singing "Did you ever see a dream walking" before she is killed by an unseen attacker.

Frankie is then attacked by someone who comes into the cloak room looking for something, but is revived by his father.
Frankie learns the girl is Melissa Anne Montgomery, the very first murder victim or a child serial killer that has yet to be caught. Melissa Anne asks for Frankie's help to find her mother.

Later, when Frankie finds out who the murderer is, he goes to the house on the cliffs where the Lady in White is said to haunt and the killer tries to throw him over. However, the Lady in White, who is Anne Montgomery, Melissa's distraught mother, saves him and is then reunited with her daughter.

Both ghosts are such tragic figures, doomed to repeat their deaths night after night until Frankie helps them both, and in doing do, unveils a murderer.

If you had seen a ghost when you were nine, what would you have done (or what did you do if you had an encounter at that age)?