Today I am pleased to welcome to my blog fellow author and friend from the AtoZChallenge, C.D. Gallant-King for an interview and to talk about his book Ten Thousand Days. 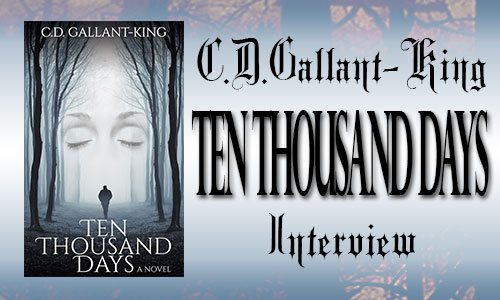 Can you tell us a little about yourself?

I was born 35 years ago in a small town on an island in the North Atlantic. I think I wrote my first story when I was about 5 years old, and I made my babysitter look up how to spell the word "extraterrestrial" in the dictionary. (Note to younger readers: A dictionary is a book, made of paper, that was full of thousands of words with their proper spelling and defintions). I continued to write through childhood, teenagery and adulthood. It always stuck with me like a chronic disease, even as I dabbled through various careers - acting, theatre design, printing, retail management, civil service, IT order analytics - and the other responsibilties of grown-up-ness, such as marriage, mortgages and monsters (ie, kids). No matter what else is going on in my life, I have to keep writing.


Tell us about your book(s).

I often say I have a Closet full of stories that no one has read, and it's not an exaggeration. I literally have boxes of manuscripts and computer disks with countless books, stories and ideas squirrelled away in the closet under the stairs. I've written 8 novels and dozens of short stories, but Ten Thousand Days is actually the first that I'm officially publishing and putting out there for the world to see. The crazy thing is that instead of going back and dusting off another manuscript, I'm actually well underway writing yet ANOTHER book instead of going back to my cache of merriment and wonder. I'm sure those other books will see the light... someday.

I write for the same reason that I jog. Not because it makes me feel good, but because if I don't I feel terrible.

I have stories in my head that need to get out. If I don't put them down on paper they rattle around (there's a lot of space up there) for years until I do something with them. I still have ideas for stories from high school that won't go away. To this end I will write anywhere, any time I can. With a full time job and small kids I don't have a lot of free time, so I've recently taken to writing during my commute to and from work on a crowded bus with my laptop balanced precariously on my knees. If I don't, I don't know when else I would write, and not writing is not an option.


What's easier for you, action, or dialogue, or description?

Dialogue, definitely. It probably comes from my theatre background, but I love good, snappy, witty dialogue, especially if it flows quickly and naturally. I actually have to be careful because my books can quickly start reading like scripts with just a bunch of talking heads. Without a stage and a director and actors, you really do need to fill in the action and description parts, too.


What is the hardest part of a book to write, beginning, middle or end?

You know, I almost said the middle, because it's certainly the most tedious. The end is easy and the most fun, I nearly always think of the ending first and then figure out how to get there. The guts of the book is just a chore setting up the awesome climax, so you have to be careful that it doesn't read like a chore, too.

Now that I think about it though, the beginning is actually the hardest part, because the beginning has to be the *best* part. It has to be perfect, or as near as you can make it. It has to catch the reader's attention and imagination. If the beginning sucks, the reader won't even get to the middle and the end, so much like foreplay it really needs the most attention.


Is there any genre you won't write and why?

Absolutely not. If I had the time, I would write every genre at least once just to try it. Currently I'm doing contemporary fantasy, but without hesitation I would try mystery, romance, erotica, horror, westerns, memoirs, a history book, illustrated children's books (though my art skills are pretty abysmal). Hell, I would even write a self-help book, though I would have even more trouble keeping a straight face with that one than I would with erotica.

I would love to try it all just to see if I could do it. Maybe I could somehow shoehorn them all into one... I wonder how many categories Amazon would let me choose for a single book? I may have just set a challenge for myself...

It's weird, but often my favourite part of the writing process is the planning. The coming up with the story idea part. It's why I have outlines for no less than 37 books on my harddrive right now (and that is seriously not an exaggeration). The kernel of the plot is the easy, exciting part. Actually putting in the work to write the story is, well, the work. Maybe one of these days I should try working with a co-author who is more dedicated to the craft and nuts and bolts of writing. We'd be unstoppable.


Do you ever cast your characters with actors in your head?

All the time. But I'm not going to tell you who I picture, it's your job to come up with your own.

I don't want to colour your experience with my perceptions. That may sound weird, since basically everything you're readin is a version of my perception. Yes, it's my story when I'm writing it, but when I'm done it becomes yours, the reader's. It's up to you to imagine it any way you want, and I want you to come away with your own opinion. If I really want a character to come across as a "Harrison Ford" type, I'm not going to call him a "Harrison Ford" type. I'll describe him as a grumpy, charming rogue with a heart of gold, and it's up to you decide if he's more a Harrison Ford or a Chris Pratt or even a Bruce Willis. or If you picture a character or setting differently then I intended, or come away with a completely different moral or theme, that's wonderful. It might mean that I did a piss-poor job with the description, but (hopefully) it more likely means that we just have different imaginations based on different memories and experiences.

Besides, the best part of any story is arguing with your friends over "who would play so -and-so in a movie." I wouldn't dare take that away from you. 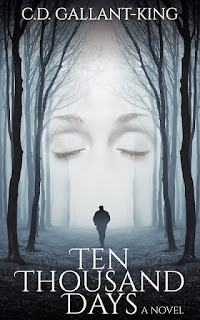 They say love hurts and time heals all wounds.

Sometimes the reverse is true.

Isaac was very good at wasting time. Video games, a mindless job, no responsibilities - he had a simple life and few wants. Despite being hopelessly average, unassuming and kind of useless, he had somehow married the most beautiful, wonderful woman in the world.

He had no idea how good he had it - until it was all taken away.

Time does not like being wasted. It is mercurial, inexorable and carries a wicked grudge. And sometimes, just sometimes, it enjoys playing games with people's lives. To be perfectly honest, Time is a bit of a jerk.

Isaac had never learned to appreciate what little time he had, and now he must travel to the ends of the universe and face unspeakable evils in a cat-and-mouse game with Time itself for the slim chance to win back a few fleeting seconds of happiness. The price of failure? Only the end of all existence.

Ten Thousand Days is a fairy tale set in the modern day, a fantastic journey of desperate love and horror with a twisted sense of humour. It's a story of exactly how far a young man will go for love...

I claim to write stories, but really I just find them in The Closet, dust them off, add a few commas and send them out into the world.

Proudly Canadian, born and raised in Newfoundland, fine-tuned and educated in Toronto and currently residing in Ottawa with a beautiful wife, two wonderful children and various furry four-legged companions.