AtoZChallenge2015 - K is for Kroll

Hello and welcome to day 11 of the AtoZChallenge 2015. 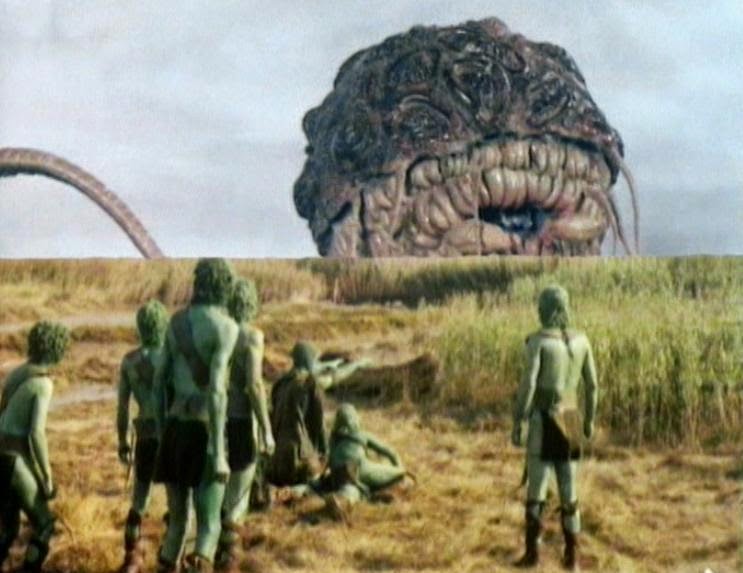 Kroll is one of those awesome monsters from Tom Baker era Doctor Who. You can probably tell by the amazing special effects in the image above ;).

Kroll is the god of the Swampies, the primitive people indigenous to the marsh moon of Delta Magna. They have worshiped him for generations and call his appearances throughout their history 'manifestations'.

Humans have come to the moon to mine for methane, which is a bi-product of Kroll's bodily processes while he remains mostly dormant under the marsh. Unfortunately for them their drilling and firing of the methane canisters into space wakes Kroll up. According to the Swampies this is the fourth manifestation of Kroll.

Kroll is actually a mutated giant squid, brought to the planet by humans in the past. At some point the Swampies had a sacred object which was on their High Priest when he was eaten by Kroll before he was huge. This object was actually a segment to the Key to Time and cause Kroll to grow to a mile wide with large numbers of tentacles.

When the Doctor and Romana retrieve the segment of the Key to Time, Kroll returns to his normal size and loses his god like proportions.

So, who's a Doctor Who fan? Who is your doctor? Mine's Tom Baker, because I remember watching him every Saturday evening in the 70s.