AtoZChallenge2015 - H is for Herne the Hunter, Hathor

Hello and welcome to day 8 of the AtoZChallenge 2015.

Herne is historically a ghost associated with Windsor forest in Berkshire. He rides on his steed with his hounds and has horns on his head and captures souls to join his hunt. However, the Herne I am interested in is from Robin of Sherwood, a British TV show from the 1980s.

Herne appears as a man wearing a cloak and headdress made of a deer. He has shaman like powers and is the ancient god of the forest. He becomes Robin's mentor when Robin, son of the Thane of Loxley, becomes an outlaw and Herne encourages him to fight for his own freedom and the freedom of his people.

When Robin of Loxley sacrifices himself to save Marion and Much, it is Herne who chooses his replacement: Robert of Huntingdon, who becomes Herne's son and the Hooded Man.

Hathor is an ancient Egyptian goddess. She is the personification of joy, feminine love, motherhood, music, dance and fertility. Being part of this pantheon made her good fodder for Stargate: SG-1. 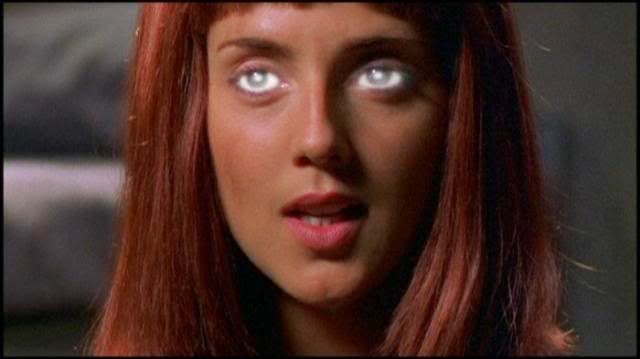 Hathor is one of the Gao'uld, a race of parasitic beings (symbiotes) of great power who possess human hosts, employing human populations as slaves, and using their sarcophagi to maintain their lives over millennia.

She was the mate and Queen of Ra and became trapped in her sarcophagus, only to be freed accidentally during a dig in Mexico. She makes her way to Stargate Command and proceeds to take over by controlling all the male personnel with her pheromones and locking up all the female ones.

She seduces Daniel Jackson into helping her create more Goa'uld and then makes Jack O'Neil a Jaffa (soldier maintained by an immature symbiote in a pouch in the abdomen) before being defeated by the ladies and Teal'c. Jack is returned to normal using her sarcophagus, which she then destroys before escaping.

She goes on to become a full system lord (the highest rank of a Goa'uld), but is later finished off when she once again goes up against SG-1.

I always liked Hathor, she is a sophisticated, sexy lady even if she is an alien parasite :).

Did you watch either of these TV shows? Which is your favourite?