AtoZChallenge2015 - C is for Cthulhu 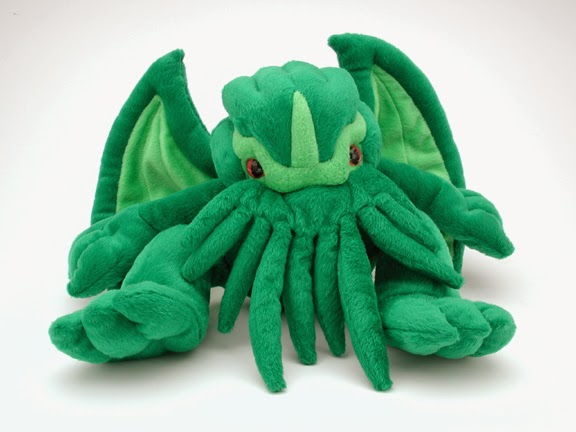 It is impossible to do Fictional Deities and Demons without talking about Cthulhu. For those who have not heard of him, or have maybe only seen the image to the right, Cthulhu is in fact one of the Great Old Ones created by H.P.Lovecraft. He is a terrible demonic, ancient god who is part octopus, part man and part dragon. His head is like a giant octopus, with uncounted amounts of tentacles around his mouth and is slimy and gelatinous.

While plush Cthulhu is cute, I suspect he isn't quite what Lovecraft was going for. Cthulhu is completely evil, worshipped by a cult of followers who go in for human sacrifice and other very nasty practices. He is supposed to be imprisoned and slumbering, but during 'The Call of Cthulhu', Lovecraft's first short story about him, a group of sailors manage to free him. He also pops up all over the place in further works and has become a mainstay of popular culture.

If you had a band loom and like to make band loom figures, I designed one for Cthulhu :). 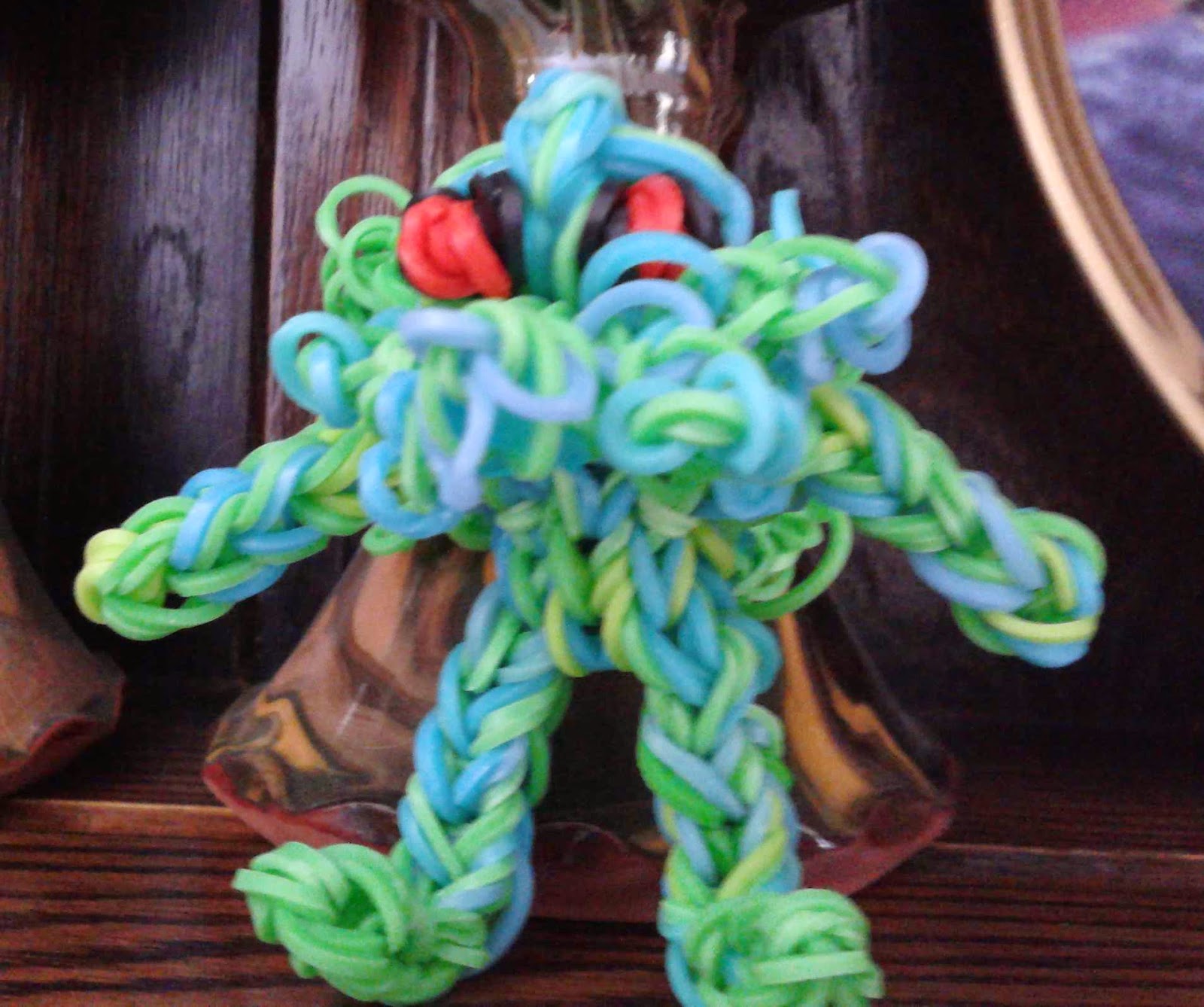 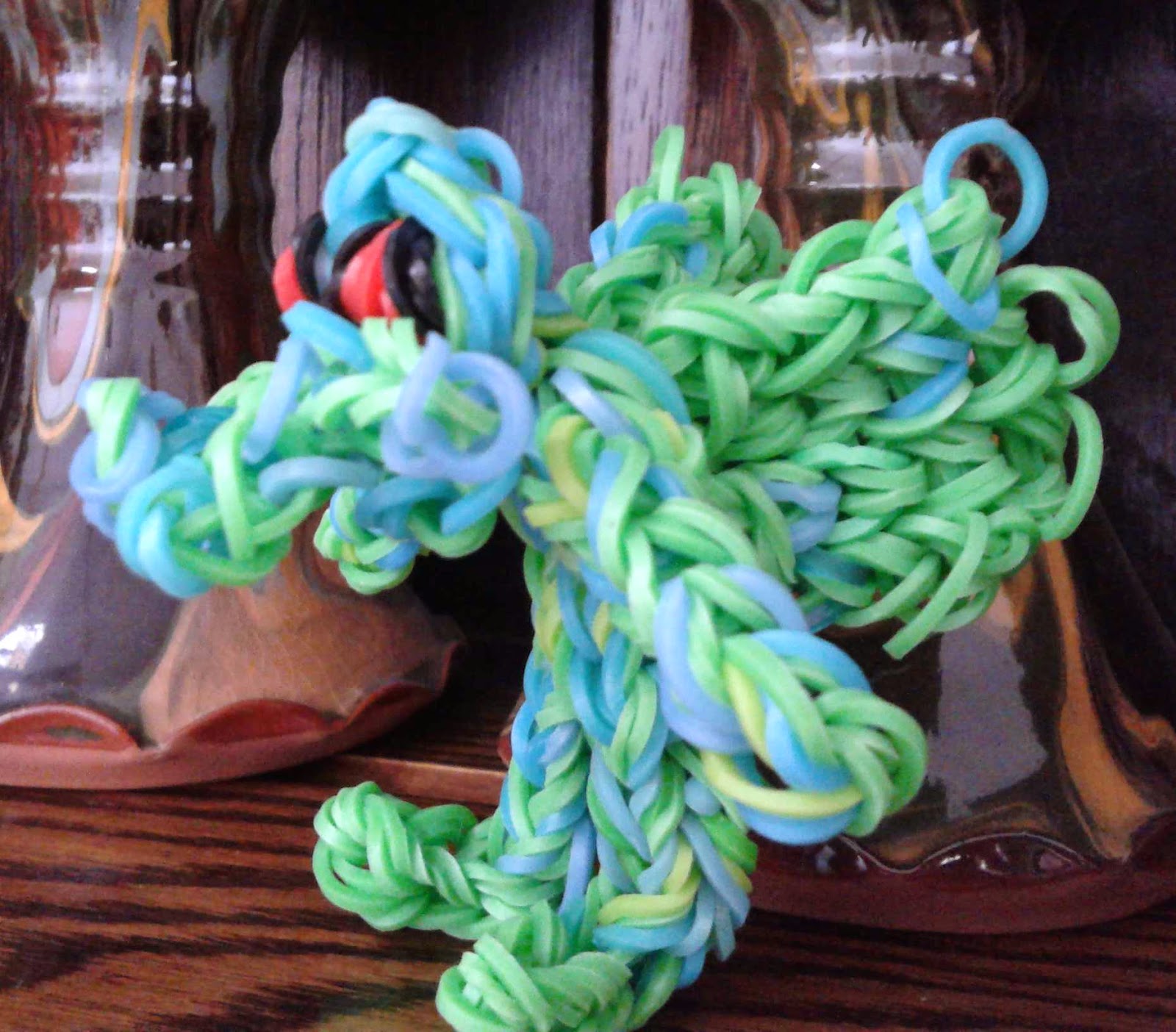 You can check it out at it's own post: Cthulhu - Band Loom Pattern


What Apollo Saw
(a short, humorous tale)
by Natasha Duncan-Drake

Apollo was just wandering through the gates of The Almighty Home for Mostly Retired Ancient Gods when he saw something he had never, in all his days, come across before. Frankly he hoped he never came across it ever again. It was disturbing.

There on the edge of a cloud was the Dread Cthulhu sitting and staring down morosely, and yes, there really was a giant tear rolling from one of his eyes. All his tentacles were drooping, his skin was even more sickly looking than usual and Apollo had to conclude that something had the old guy really down.

Now, while one pantheon didn't tend to interfere in the business of another pantheon, Apollo just couldn't bring himself to walk away. Possibly it was morbid fascination. He hadn't even been aware Great Old Ones could cry. Then again they had all changed as humanity started to forget about them. These days Apollo mostly liked to surf.

Making himself larger, so he was only slightly smaller than Cthulhu (there was nothing more difficult than talking to someone the size of your hand), Apollo walked over.

He was careful to stay out of reach of a tentacle that twitched in his direction.

"Nothing," Cthulhu said and Apollo winced at the cacophonic noise.

All gods could understand each other, but that didn't mean they all spoke the same language and Cthulhu's sounded much better underwater.

"You sure, because you look down to me, dude?"

As the word slipped out of his mouth he was slightly horrified and made a mental note to maybe get back into medicine, because he was beginning to sound like a beach bum.

They all had their down days; it happened when most of your worshipers had forgotten about you.
"It's the humans," Cthulhu finally replied.

"Yeah, they're a contrary lot," Apollo agreed, "but you shouldn't let them get to you."

For a moment there was silence and then suddenly Apollo found that he wasn't quick enough to avoid getting armfuls of slimy octopus-cum-dragon. At first he thought Cthulhu might be trying to eat him, but then discovered the Great Old One was in fact blubbering on his shoulder.

"They can't even spell my name right," Cthulhu wailed, which really kind of hurt Apollo's ears, but what could he do.

"Oh man, yeah, that would be kind of upsetting," he said, cautiously patting Cthulhu on the back, "but, hey, what do they know?"

Cthulhu continued sniffling and Apollo began to get desperate; Great Old One goo was really hard to get out of material.

"How about you and I go to the rec room," he suggested, "and we can set up some civilisations like they were in the day and you and me can rain down plague and destruction on them? That could be fun, right?"

It took another minute or so, but that seemed to have interested Cthulhu, because the mind shattering wailing had stopped. Finally Cthulhu sat back.

"Could we stomp a few cities?" he asked.

"Sure, dude," Apollo said and mentally winced again; possibly some smiting would be good for him too. "We can even flood a few. How does that sound?"

Cthulhu's tentacles moved in a very unsettling way and it took him a moment, but Apollo realised the old guy was smiling. It was, quite honestly, worse than the crying.
My Other Blogs in the AtoZ: Wittegen Press | FB3X (AC)
Click here to see all other participants in the AtoZChallenge.